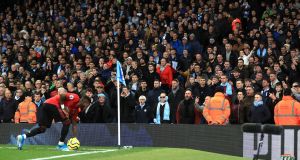 A 41-year-old man has been arrested in connection with the allegations of racist abuse by a Manchester City supporter during Saturday’s derby at the Etihad Stadium.

A video circulating on social media appeared to show a fan aiming monkey chants towards Manchester United players during the Red Devils’ 2-1 victory.

City swiftly issued a statement saying the club was working with Greater Manchester Police, and the GMP announced on Sunday morning that the man had been arrested on suspicion of a racially-aggravated public order offence.

A GMP statement read: “A man has been arrested after a video posted on social media showed a supporter making racist gestures at the Manchester City v Manchester United match at the Etihad Stadium yesterday.

“At around 6.55pm on Saturday, December 7, 2019 police were called to a report of a supporter making alleged racist gestures and sounds towards players during the Manchester City and Manchester United derby.

“A 41-year-old man has been arrested on suspicion of a racially aggravated public order and remains in custody for questioning.”

Superintendent Chris Hill of the City of Manchester Division said the force was taking the matter “extremely seriously”.

“I would like to thank the public for their ongoing support with this incident,” he said.

“Racism of any kind has no place in football or our society and I hope this arrest shows that we are taking this matter extremely seriously.

“We will continue to work with Manchester City and Manchester United Football Clubs on this incident and will investigate any other lines of enquiries.”

The Football Association will also investigate and is planning to talk to the clubs, referee Anthony Taylor, the police and other relevant parties.

United reported the incident to City and Taylor, with more than one of their players feeling they had abuse of a racist nature aimed at them.

There were also reports of missiles being thrown as tempers boiled over in the stands, with Fred appearing to be hit by an object hurled from the crowd as the visitors prepared to take a corner.

United boss Ole Gunnar Solskjaer said: “Fred and Jesse (Lingard) were in the corner, taking a corner, and I’ve seen the video, heard from the boys.

“We keep talking about it every bloody week. But he’s been caught on camera. He should, in my opinion, never be allowed into a football ground again and I’ve seen the video. Unacceptable.”

City’s statement read: “Manchester City FC are aware of a video circulating on social media which appears to show a supporter making racial gestures during the second half of the match against Manchester United this evening.

“Officials from the club are working with Greater Manchester Police in order to help them identify any individuals concerned and assist with their enquiries.

“The club are also working with GMP regarding an instance of objects being thrown onto the field of play.

“The club operates a zero tolerance policy regarding discrimination of any kind, and anyone found guilty of racial abuse will be banned from the club for life.”

The issue of racism in English football has hit the headlines again virtually a year to the day since City’s Raheem Sterling was subjected to racially abusive language and threatening and aggressive behaviour at Stamford Bridge that led to a Chelsea supporter being permanently banned.

England’s players faced monkey chants and Nazi salutes in a Euro 2020 qualifier away to Bulgaria in October, while earlier on Saturday there was an incident of alleged racist abuse by a supporter towards a visiting player at the League Two match between Forest Green and Scunthorpe.

Fred said the alleged incident at the Etihad showed “we are still in a backward society”.

“On the field, I didn’t see anything. I saw it only in the locker room afterwards,” the former Shakhtar Donetsk midfielder told ESPN Brazil. “The guys showed me. He even threw a lighter and it hit me. I try not to care about that. I try to look ahead.

“Unfortunately, this is happening in some stadiums. It happened here, it happened in Ukraine with some friends. It’s sad, but we have to keep our heads up and forget about that. We can’t give them any attention because that’s all they want. I spoke to the referee after the match, they will do something about it and that’s all.

“We are all the same regardless of skin colour, hair and gender. We came from the same place and we all go to the same place when it’s all said and done. Thank God I have a lot of friends here in the locker room who hugged me, like Lingard. I don’t want to think about it. I just want to move on.”