Liverpool manager faces his bete noire as his team take on Brighton at 12.30pm 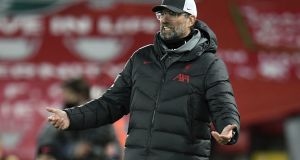 Liverpool manager Jürgen Klopp has told his players they cannot use his complaints about the fixture schedule as an excuse to underperform. File photograph: Peter Powell/PA Wire

Jürgen Klopp has told Liverpool’s players they cannot use his complaints about their workload and the fixture schedule as an excuse to underperform.

The Liverpool manager faces his bete noire at Brighton – a 12.30pm Saturday kick-off after a Wednesday night game – and remains annoyed at the lack of progress over allowing the use of five substitutes in the Premier League. The champions would go top with victory at Brighton and, other than the flat Champions League defeat to Atalanta in midweek when Klopp rang the changes, have not been derailed by numerous challenges.

But Klopp is conscious that his criticism of the demands on players could seep into Liverpool’s dressingroom, and has taken steps to guard against this. “We deal with the situation,” he said on Friday. “We don’t go for excuses. I spoke to my boys already and told them that even though I’ve spoken about the subject a lot that means nothing for us – I only expect us to be 100 per cent there at 12.30 tomorrow and nothing else.

“That doesn’t mean it’s not necessary to talk about it. We still have no word on five subs even though we had a meeting among the managers where it was clear, if we had counted that day, it would have been at least 15-5, if not 16-4 [in favour of allowing five substitutes]. But we couldn’t vote and nothing has changed.”

He outlined the impact of a 12.30pm kick-off on preparations. “Today [Friday] is the only session we have but it is second day recovery [from Wednesday’s game] so there is no intensity, it is just tactical stuff because obviously Brighton play differently to Atalanta.

“If you play [later] in the afternoon obviously the boys sleep longer and sleep is a big part in recovery. That’s why I have never spoken about Wednesday-Saturday 3pm not being possible. That’s a completely normal routine for us. It is Wednesday-Saturday 12.30[pm] that should not be possible. If you ask sports science people who have nothing to do with football or Liverpool they will tell you exactly the same.”

Klopp claims he is still hopeful that Georginio Wijnaldum will commit his long-term future to Liverpool despite the Netherlands international, who was wanted by Barcelona in the last transfer window, being free to sign a pre-contract agreement with a foreign club from January 1st.

“As long as nothing is decided everything is possible. I am positive. It is no problem. We’ve had situations like this before – with Emre Can for example. Emre played and gave absolutely everything until the last day of his contract and Gini will do the same, no doubt.”