Dundalk show intent from the off as they power past Bohemians 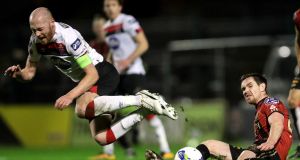 When he was the manager at Dalymount Park, Stephen Kenny is said to have once had a few Bohemians fans into the dressingroom before a game against Shamrock Rovers so they could tell the players just how much it meant to them to beat their Dublin rivals.

It’s not clear what had his former Dundalk players so riled up for this FAI Cup quarter-final; videos of brutalist architecture, perhaps, or bearded locals undermining big breweries by drinking bottled craft beers . . . whatever it was, though, it certainly seemed to have got them going.

A couple of goals from David McMillan as well as strikes from Michael Duffy and Nathan Oduwa put them very comfortably into next weekend’s semi-final at Athlone. Another display on anything like this level and the First Division side will be in for a difficult afternoon.

“We are not surprised by the performance,” insisted Filippo Giovagnoli afterwards, despite the fact that his team had come looking for a first win in seven, four if you discount the Europa League group defeats. “We have cohesion, we are a family that works hard every day but we have had to devote time to Europe and that has caused us problems in the league. Now, we are in good shape and we will finish the season strongly.”

They started so strongly that they were in front here before Bohemians seemed to have woken up to the fact they had a game on their hands. The goal came after Seán Gannon fed McMillan whose low pass split the home side’s defence to provide Duffy with the sort of opportunity he doesn’t decline when anywhere close to his best form.

Playing like this, it seemed a pity Kenny’s attempt to call him up this week hadn’t come to more.

The goal, just 90 seconds in, shocked Keith Long’s side into life and when pressure after a set piece yielded a penalty for a handball by Chris Shields, it was clear we were in for an entertaining contest. Andre Wright beat Gary Rogers, just, to the goalkeeper’s bottom left corner to level things up and the hosts would have been in front not long after when Wright wrong-footed Rogers only for Andy Boyle to stop the header crossing the line.

There was no dispute about that one but after McMillan had restored Dundalk’s lead with a spot kick given for a push by Keith Buckley on Duffy, there was certainly some question over whether the ball had just gone out of play before Cameron Dummigan provided the cross for a cracking headed goal by the centre forward. Countless viewings of replays didn’t completely clear the matter up but the referee’s assistant stuck to his guns after calling it in real time.

In the space of a couple of minutes then, Bohemians found themselves having to chase things and when Long looked to step up the pace of the pursuit 10 minutes into the second he threw on Evan Ferguson.

The teenage striker came very close to getting his side back into it with a deflected shot 70 minutes in forcing an outstanding finger-tip stop from Rogers. He followed that with a double save moments later as the young striker first headed goalwards, then sought to turn loose ball home after the goalkeeper had pushed it on to the post.

It was enthralling stuff and Bohemians seemed to be very much in the game even if they were still two goals behind. Their hopes of getting back on level terms were dealt a more or less fatal blow when Michael Barker picked up his second yellow card of the night for a late challenge of Shields.

Bohemians kept at it to be fair and continued to exert a fair bit of pressure around the home side’s area, but they struggled to carve out any more clearcut chances while starting to look a lot more vulnerable to getting caught on the break.

When it first happened, McMillan looked likely to wrap up his hat-trick but his shot was poor enough and James Talbot saved with his legs. The visitors got more bodies forward a few minutes later, though, and when the Dundalk captain fed Duffy out to the left, his low cross was turned home by Oduwa with what was probably the 24-year-old substitute’s first touch of the game.