Guardiola’s quest for control at Manchester City undermined by VAR 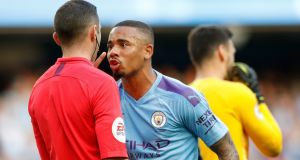 Manchester City’s Gabriel Jesus appeals to the match referee Michael Oliver after his goal is ruled out by VAR. Photograph: PA

Football remains a magnificently capricious sport. You can crush its competitiveness with a self-perpetuating structure that leads to a radically unequal distribution of resources. You can pack the heft of oligarchs and emirates behind clubs. You can record and analyse. You can use technology as far as possible to eliminate human error. You can invest and think and strive to bring it under rein and still, every now and again, it can turn up games like Saturday’s at the Etihad, when one side has 30 shots to the other’s three (or, in modern parlance, depending whose model you prefer an xG of about 3.00 to about 0.2) and it ends in a draw. And not only that, it will add a self-knowing twist at the end. Football will not be tamed.

Manchester City were excellent. They will still probably win the Premier League. Their superiority against probably the third-best side of last season should fill their challengers with foreboding, but this was a reminder that there will always be a wrinkle. Pep Guardiola wants control. He studies and studies and studies, looking for any edge, desperate to expose any possible flaw in his opponent. He drills his team relentlessly, working on shape and positioning. He wants always to retain possession and then to use it in the ways he has worked out to unpick the opposition. That’s why he has said that, if an immediate counter isn’t on, he wants his team to play 15 passes to get themselves set again. He is not Jurgen Klopp: he does not thrive on chaos, bending it to his will.

Possession gives him order, and that is his greatest contribution to the tactical development of the game. Others, Johan Cruyff most notably, have sought to dominate the ball, but none have done so as effectively as Guardiola. He has, aided by improvements in playing surfaces and equipment and changes to the laws of the game, turned 11-a-side into something that at times looks a lot like five-a-side. He has made the rondo a way of life. Nobody has come so close to establishing control as he has – in part, it’s only fair to acknowledge, very few managers have had circumstances as favourable as he has enjoyed. To take 198 points over two seasons is something unheard of. And yet still football, occasionally, every once in a while, is able to wriggle from his grasp and dance anarchically upon his dreams of order.

To an extent that’s because his own players have a frustrating tendency to being human. Ederson both in last season’s Champions League quarter-final and on Saturday, was beaten by a long-range shot low to his right. Markers lose their men. Others suffer lapses of concentration and fail to live up to Guardiola’s positional demands – hence his rant at Sergio Aguero just before Lucas Moura’s goal. To an extent it’s because opponents resist, or have moments of inspiration. And to an extent, it’s because that’s just how football is. VAR, it turns out, far from being some neutral all-seeing eye, a benevolent Big Brother visiting justice upon the world, has plunged the game into epistemological crisis.

What is handball? If players can move up to 15cm between frames, how can offsides be given to an accuracy of millimetre? What is “clear and obvious” and could something be obvious but not clear? What level of error are we prepared to accept so claims of accuracy don’t make us uncomfortable? And is it really right that there’s strict liability for a ball brushing a player’s arm but not for one player barging another in the back?

But the disallowing of Gabriel Jesus’s apparent winner was more than just another VAR call; it was a decision locked in such regress of ironies it felt like football was almost wilfully exercising its mischievous streak. Aymeric Laporte did handle the ball and as the law now stands, any contact with the arm in the buildup to a goal is an offence. By the law, the decision was correct, just as it was correct that Leander Dendoncker’s goal against Leicester last week was ruled out.

But minds inevitably go back to that quarter-final last year and the vital goal Fernando Llorente scored for Spurs via a deflection off his arm. Under the law as it now stands, that would have been ruled out. Raheem Sterling, of course, then had an injury-time goal ruled out for offside; had VAR been operational the previous season, the goal City had chalked off for offside shortly before half-time in the second leg of the quarter-final tie against Liverpool would have stood.

City’s misfortune has been to keep finding themselves a year behind the interpretation. It’s coincidence of course, and certainly not the conspiracy many City fans leaving the Etihad seemed to want to claim but still, it’s hard not to appreciate the irony VAR, ostensibly a force for order and consistency in football, should, even though it’s likely to be temporary, be playing such a central role in undermining Guardiola’s quest for order. Football, even now, will have its sport.

1 Tour de France: Every yellow jersey winner must feel guilty by some association
2 Ken Early: Handball ‘crisis’ a timely distraction from the grim bigger picture
3 49 and out for Corofin as their long Galway reign is ended
4 GAA Championships await and we need a button for the buzz of the crowd
5 Sporting Upsets: Connacht’s greatest day as they claim title glory
Real news has value SUBSCRIBE