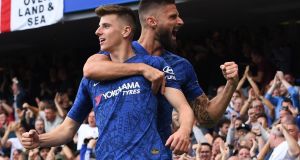 Once again Chelsea fell away in the second half. The early optimism was forgotten long before the final whistle and a day that was supposed to belong to Frank Lampard ended up being remembered for the way his new side’s flaws were exposed by the intelligence of Leicester, whose vibrant revival after a slow start demonstrated why they have aspirations of breaking into the top six this season.

Leicester were the team pressing for a winner in the end and, in the circumstances, Lampard had to be satisfied with a point given how the game turned in the favour of Brendan Rodgers’s team after the break. There were some encouraging signs for Chelsea’s new manager, not least a first Premier League goal for the outstanding Mason Mount, plus evidence that he has the backing of a supportive home crowd.

On this evidence, however, it is going to be a while before Chelsea are more than a work in progress. They were outplayed in the second half, just as they were against Manchester United last weekend, and were lucky that Leicester were unable to add a second goal after Wilfred Ndidi’s equaliser.

Stamford Bridge was rocking before kick-off and Lampard’s players were eager to demonstrate what their new manager wants from them. The game was played in a deafening atmosphere and Chelsea started like a team with a point to prove, pinning Leicester back, hunting down every loose ball and flying forward from the first whistle. It was relentless stuff from the hosts and they almost scored with their first attack, Pedro volleying just wide after a fine lay-off from Olivier Giroud, who looked in the mood to bully a defence weakened by the sale of Harry Maguire to United.

The absence of Ben Chilwell at left-back made Leicester’s back four look even more vulnerable and they were slow to react to the obvious threat from Chelsea, who were pressing high in an attempt to force errors in dangerous areas. Lampard wants his players to be hungry when their opponents have possession and although Rodgers always gives his teams freedom to express themselves, Leicester’s manager needed his players to judge the temperature and weather the Lampard-inspired storm. Aesthetics be damned – the visitors could have done with asking Jamie Vardy to chase a few long balls down the channels during those frenetic early minutes.

Yet Leicester continued to back their ability on the ball instead, even after Kasper Schmeichel had rescued them with a splendid double save from Mount and Christian Pulisic, and nothing encapsulated their failure to read the warning signs more than Ndidi dithering on the edge of his own area in the sixth minute and assuming that nobody would come near him.

The Leicester midfielder could not have been more wrong. Eager to show that he has been paying attention to Lampard’s instructions, Mount sprinted forward and won the ball with a challenge that left Ndidi on the ground. At least the Nigerian had a good view of the youngster, who had an impressive loan spell at Derby last season, demonstrating why he has been compared to Lampard as he kept his balance and drilled a low, hard finish past Schmeichel from 18 yards.

At that stage, with Chelsea rampant and Stamford Bridge bouncing, Leicester must have feared the worst and they could have fallen further behind when N’Golo Kanté fired wide from close range. Yet the consolation for Rodgers was knowing that Chelsea were unlikely to maintain that early tempo. Sure enough, the contest gradually settled down and Leicester enjoyed some promising moments as the interval approached, even though they were finding it hard to get into shooting positions.

Lampard could not be entirely satisfied at the end of the opening period. His side had grown a little erratic, with Pulisic and Pedro struggling to create in the wide areas, and Leicester took control at the start of the second half. Hamza Choudhury was impressing in midfield, Vardy’s speed was irritating Chelsea’s back four and an equaliser looked certain when the excellent James Maddison rounded Kepa Arrizabalaga, only for Mount to demonstrate his team ethic by stopping Youri Tielemans from tapping into an empty net.

The mood had changed and Lampard could sense which way the wind was blowing. He tried to jolt his side into life by replacing Giroud with Tammy Abraham, who was the subject of racial abuse on social media last week, but the problem was in midfield, where Kanté and Jorginho were finding it hard to keep track of Leicester’s creators, Maddison, Ayoze Pérez and Tielemans.

Maddison was pulling the strings for Leicester and it was the England international who created the equaliser in the 67th minute. He bent in a corner from the right and Cesar Azpilicueta was powerless to prevent Ndidi, seeking to make up for his earlier error, from heading past Arrizabalaga.

In previous times Chelsea would have punished such impertinence. Yet they remained becalmed and while Lampard was relieved that Maddison and Vardy missed late chances to win it for Leicester, he is still searching for his first win. – Guardian