Three for joy as Pukki powers Canaries past Magpies 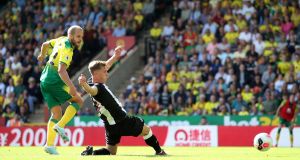 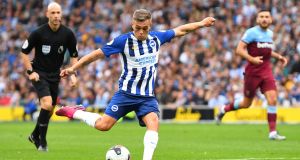 Leandro Trossard opens the scoring for Brighton in the Premier League game against West Ham at the Amex Stadium. Photograph: Dylan Martinez/Reuters

A Teemu Pukki hat-trick got Norwich off the mark at home in the Premier League as they eased past Newcastle in a 3-1 win.

The Canaries started brightly and were rewarded for their intensity when Pukki fired his side into the lead with a powerful volley from inside the box and past Martin Dubravka.

Pukki, the Championship’s top-scorer last season with 29 goals in 43 matches, added a second in the 63rd minute when he turned and struck into the bottom corner.

And just 12 minutes later the Finland international completed his hat-trick, twisting past the Newcastle defence before slotting home.

Jonjo Shelvey pulled one back for the Magpies in injury time.

Aston Villa endured a disappointing first home game of their Premier League return as early goals from Josh King and Harry Wilson condemned them to a 2-1 loss to Bournemouth.

Villa’s fightback after that nightmare start saw them reduce the deficit in the 71st minute through a fine Luiz finish, but they were unable to save themselves from another defeat, a week after their top-flight comeback campaign opened with a 3-1 reverse at Tottenham.

Bournemouth, meanwhile, celebrated their first win of the season, having drawn 1-1 with Sheffield United last week.

A stunning debut goal from Leandro Trossard secured a point for Brighton in a 1-1 draw at home to West Ham.

Trossard, a €20 million summer signing from Belgian side Genk, struck shortly after Javier Hernandez had given West Ham the lead against the run of play.

The 24-year-old had an eventful debut to say the least, having a goal ruled out by VAR and missing a sitter before he eventually got off the mark to earn his new side a 1-1 draw.

West Ham had lost both their previous Premier League visits to Sussex and should have lost this one, too, with Brighton dominant throughout.

New manager Graham Potter has got his side playing some confident, slick football and West Ham for long periods had no answers.

The Brazilian’s 10th-minute strike helped Everton capitalise on a lively start while the Toffees mixed resolute defence with moments of fortune thereafter to keep a sixth successive top-flight clean sheet at home.

Craig Dawson headed against the bar in the first half while Jordan Pickford was struck in the face after Troy Deeney had gone through one-on-one just before the hour mark, but Watford were unable to mount any sustained pressure in the later stages.

Having been stunned 3-0 in last week’s curtain-raiser at home to Brighton, another loss leaves them pointless after their first two fixtures as Everton moved to fourth, following their draw at Crystal Palace in their season opener.

The Hornets remain winless at this ground in 14 attempts while this was their 12th defeat against an opponent who have not conceded on home soil since February 6th.