Wembley is the sole focus for Leicester and Aston Villa 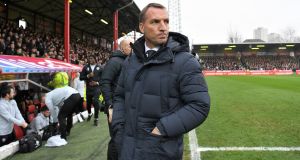 Leicester City manager Brendan Rodgers is hoping to lead his side to the Carabao Cup final. Photo: Michael Regan/Getty Images

Leicester City’s ambition for this season is to qualify for the Champions League while Aston Villa’s main aim is to stave off relegation from the Premier League, but on Tuesday night both clubs will have only one thing on their minds: reaching the League Cup final.

With their semi-final perfectly balanced after the 1-1 draw in the first leg, the importance of the second leg at Villa Park can be gauged by the fact Brendan Rodgers says Jamie Vardy could play despite not being fully fit and Dean Smith is likely to give a debut to Villa’s new £8.5million striker Mbwana “Ally” Samatta. Both teams, then, will be at full tilt.

Leicester travel with the knowledge they have already demolished Villa at the same venue this season – winning 4-1 in the Premier League in December – but while that may bolster their confidence, there must also be a nagging fear that Villa have grown stronger since then and, indeed, since they battled for that draw in the first leg. Smith hopes this game will bring proof that his team are getting better at both ends of the pitch.

Their defensive solidity has improved since the manager’s switch to a back-three formation, as was apparent in a first leg in which Villa fended off heavy pressure from Rodgers’ side, who dominated possession. Pepe Reina has joined the club since then and the arrival of an experienced goalkeeper has fortified Villa’s backline even further.

Up top, meanwhile, Villa hope Samatta will provide the sharpness that they have lacked too often this season. The winger Anwar El Ghazi did a reasonable job filling in for Wesley after the Brazilian striker suffered cruciate ligament damage in the win at Burnley on New Year’s Day, but Villa’s need for a goalscorer has been achingly obvious. Samatta should get this first chance to show they have found one. Although the striker’s ability to fit in swiftly is likely to prove critical to Villa’s cup prospects, not to mention their Premier League survival, Smith warns against expecting too much too soon from a 27-year-old whose club football to date has been played with Genk and, before that, Tout Puissant Mazembe and Simba SC.

“There’s always an adaptation risk when a player comes in from another country, and we’ve had a few this season,” said Smith. “We’re not expecting him to hit the ground running straight away, but we know the qualities he has and hopefully he can bring them to the forefront straight away.”

Rodgers, who craves a trophy as tangible evidence for the strides Leicester have made under his management, has an array of striking options. But even though Kelechi Iheanacho is on good form, and Ayoze Pérez is looking increasingly dangerous whether played centrally or wide, the temptation to deploy Vardy is powerful.

Less than a week after the 33-year-old came off with a glute injury after booting the ball clear during the league win over West Ham, Vardy could be asked to fire Leicester into their first final for 20 years, either from the start or off the bench.

“Will he be 100 per cent? He might be 80 per cent,” said Rodgers. “But I’d rather an 80 per cent Jamie Vardy [than none at all], with what he gives the team, and his threat. It’s also about the further risk of injury, that’s what we’re weighing up. But he’s come through the last two days on the field well. We’ll see how that looks in the morning but I’m very confident he’ll be involved in some part.”