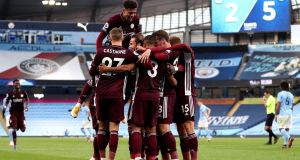 This was a scintillating exhibition of why Jamie Vardy is so dangerous. His was a hat-trick that made Manchester City appear half-paced and meant Leicester City gained their first league win at City for 31 years.

Vardy’s intervention – scoring penalties in the 37th and 58th minutes plus a sweet backheeled finish in-between – meant that before the hour the Foxes were cruising, a memorable win completed by James Maddison’s 20-yard curler and Youri Tielemans’ third penalty for them, the last coming after the No 9 had been replaced. The victory takes Leicester top of the table.

Guardiola’s solution to the absence of the injured Sergio Agüero and Gabriel Jesus was to field Raheem Sterling as a nominal No 9 who was to be fluid in positioning. From the league win against Burnley last week Brendan Rodgers was without Wilfred Ndidi (abductor problem), with the manager dropping Ayoze Pérez as in came Daniel Amartey and Jonny Evans.

From kick-off a pattern of City’s attack against Leicester’s defence began that ran until the break. This had Rodgers’s men packing a five-man rearguard and four-man midfield, Vardy the sole outlet. Four minutes were all that was required for this to apparently be proved too passive.

A Kevin De Bruyne corner from the left was headed inadvertently by James Justin into Riyad Mahrez’s path. The Algerian placed the laces of his right boot through the ball for a strike that powered past Kasper Schmeichel.

Despite the blow the Foxes retained their shape and a strategy that depended on a quick break through, say, Harvey Barnes hitting a pass behind the high City line for Vardy or AN Other to break fast. So it was that the No 15 stroked a ball along the left – to Justin, but the wing-back did not have the wheels to outpace Kyle Walker, who cleared the danger.

Despite a long list of absentees headed by Agüero and Jesus, City at this point were a robust unit that had their opponent where they wished. After some slow carousel passing involving Nathan Aké and Eric García, suddenly De Bruyne tapped a pass to Mahrez and his release had Sterling swivelling and shooting straight at Schmeichel.

Leicester, though, were to show a tough core. A first glimmer was a corner claimed by Barnes’s surge, García turning the ball out. Tielemans took this short to Justin but his delivery was collected by Ederson.

A De Bruyne free-kick was far more precise: placed for Fernandinho to head in but he missed – poorly. City were exposed when a counterattack left them trailing, the ball going across the area to Justin though, again, the No 2’s intended pass was misdirected. De Bruyne was floating across the field to take up smart positions, one area of his game that makes him so menacing. Suddenly, he was a right-winger, latching on to Walker’s service, zipping in a cross that had Daniel Amartey scrambling to clear.

Yet by half-time Rodgers’s gameplan was in rude health due to City – via Walker – being sucker-punched. Here the right-back allowed Vardy to get the wrong side in the area and so pulled him down. Michael Oliver, the referee, pointed to the spot and Vardy smashed home.

Further succour for Leicester came in another break with a pass over the top that required García to win a foot-race with Barnes. He did but when the second half kicked off City had questions to answer. A prime one was why the two-man holding midfield system featuring Fernandinho and Rodri was still not able to stem the Foxes’s chief ploy of the quick ball, whether aerial or low.

Perhaps deciding this made the XI too static, only five minutes had passed when Fernandinho was replaced by Liam Delap, the 17-year-old making his league debut. Instantly this was made to appear a false move from Guardiola as Leicester took the lead. This was via a quick sequence in which Tielemans fed Timothy Castagne down the right.

Now came Vardy magic, the irrepressible centre-forward beating Ederson with a back-heeled flick. If this was good from Leicester, events improved further moments later. Vardy, again, was key. This time a burst had García shoving him down and Oliver – correctly – awarded a second penalty. Vardy stroked this to Ederson’s left and it was 3-1 to the visitors.

City’s riposte was a Benjamin Mendy cross that Delap headed on to the bar. Yet what unfolded was a home side who were clumsy of touch and too frantic when attacking. A De Bruyne ball that skimmed towards Sterling was overhit.

Ferran Torres, on as a replacement, skewered a cross into the behind-goal seats. Walker fired a pass across goal and neither Delap, Sterling nor anyone had the instinct to connect. While Aké grabbed a second for City this was consolation only. More prescient is how this reverse poses a serious question about a credible title challenge from them. - Guardian

1 Diego Maradona dies of heart attack, aged 60
2 Gordon D'Arcy: I know what Joe and Cheika would do. Fix the basics
3 Andy Farrell to delve deeper into Irish squad for team to play Georgia
4 Darragh Ó Sé: Cork and Donegal went out with the wrong attitude
5 Keith Duggan: Through the glories and the disgraces, we were all Maradona addicts
Real news has value SUBSCRIBE