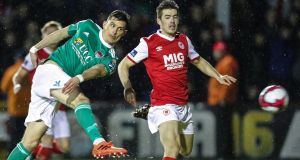 Cork City’s Graham Cummins scores a goal on an eventful night for him. Photograph: Laszlo Geczo/Inpho

In an age when league formats are routinely seen as just another tool to maintain spectator interest, this might serve as a useful example for those in favour of taking things one step further: “handicap games – have them hanging on the edge of their seats for the whole of the 90 minutes” the campaign slogan might well go. If this could be taken as setting the standard, there would be no shortage of takers.

At the end of it all, Cork emerged as winners and went home with all three points but it was a far cry from the night that it had initially shaped up to be. At two nil to City the game looked, scarcely 12 minutes in, to be as good as over. The locals were having more of the chances but John Caulfield’s men seemed as though they might score every time they went forward – they actually had until then. Graham Cummins and the referee, though, then combined to make things interesting again and it would eventually take a slightly freakish goal from Kieran Sadlier late on to actually secure the win.

After a goal and an assist, Cummins completed an eventful night by connecting, it appeared, with Kevin Toner at which point referee Robert Harvey showed him a straight red. In the absence of replays it was hard to be completely sure from the other side of the pitch whether it was deserved and John Caulfield seemed to give his striker the benefit of the doubt as the player passed him on the way to the tunnel but the reaction from members of the home side and support was furious and the match official looked well placed to make the call.

Its impact on the game was immediate. Cork had, until then, somehow managed to look quietly superior despite having less of the ball and fewer of the game’s early chances.

On the face of it, Mark McNulty had had to keep his side in things with three early saves and yet whenever City broke towards Barry Murphy’s goal, their hosts seemed instantaneously to lose all composure. Barry McNamee had only to keep his head as he arrived, entirely unmarked, to meet Cummins’ cross on the first occasion and the striker did well himself to keep his powerful finish on target as he turned, for the second.

Toner, a recent recruit from Aston Villa, didn’t seem to be having such a great first night up until that point but, if ever anyone can be said to have taken one for the team, then he surely can here.

He looked shaken by his encounter with the City striker but not half as much as the champions did after having been reduced to 10 men.

McNamee, Sadlier and eventually Karl Sheppard each gave the “stand in striker” role a go but Caulfield’s men went a long time after the dismissal before they posed a threat again.

St Patrick’s, on the other hand, were relentless in the pursuit of the goals required to even things up and had succeeded by the 46th minute with Aaron Barry appearing to get the final touch for the first after Conan Byrne’s corner had been turned goalwards by Ian Bermingham and Byrne himself then beat McNulty at the goalkeeper’s near post with a low drive moments after the second half had started.

Whether they would have the wherewithal to get the additional goal required for victory still seemed a little doubtful, though.

City were struggling out on the flanks where Simon Madden made his presence felt but they got a lot of bodies behind the ball around the area and hung in there impressively through more than one goalmouth scramble.

Christy Fagan might have made a difference given the close quarters nature of it all but the striker hadn’t even made the bench (due to illness) and in his absence St Patrick’s simply couldn’t find a way to make another breakthrough.

Still, it seemed entirely implausible by then that they might actually lose even after Cork had finally earned a couple of set pieces inside their opposition’s half and Caulfield managed to get worked up claiming a penalty when Alan Bennett’s shot had been deflected away from the target by the shoulder of Bermingham.

With eight minutes to play, however, the locals were left stunned when Sadlier’s corner went straight in.

Martin O’Neill, watching from the stand, must have found it all pretty entertaining but the hosts fell into a pained silence as their rivals reminded them, and not for the first time, that that’s why they’re champions.