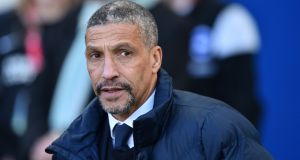 Brighton manager Chris Hughton: “We are on a good run and have a good changing room.” Photograph: Glyn Kirk/AFP/Getty Images

Chris Hughton says he does not believe in omens but for Brighton they are stacking up promisingly. Their most recent season in the top flight brought an FA Cup final appearance and, this time around, they are led by the only serving Premier League manager to have won the competition as a player.

“I don’t think it gives me an advantage but what it does give me is that I know what it means to win it,” said Hughton, who started both editions of the replayed 1981 and 1982 finals for Tottenham. He described the former, against Manchester City – Ricky Villa, Tommy Hutchison et al – as “the highlight of my career” after watching Brighton beat Coventry 3-1 to move within three wins of a repeat.

The small complication is that their first quarter-final since 1986 brings a trip to Old Trafford. There are waymarkers from the past here too, but of the less favourable kind: Manchester United were the opponents when Brighton reached the final, a year after Hughton and Tottenham defeated QPR for the second of those winner’s medals, and that one was also played twice. It would not have been but for Gordon Smith’s famous late miss; United won the second game 4-0 and Hughton believes the fact still reverberates so strongly is telling.

“People remember it and that is because of [the cup’s] magnitude,” he said. “It is best to speak to some foreign managers because when they come here it is often what they know about the magic of this cup competition. We have been brought up on it. However much we think it is changing, which it is, once you get to the latter stages it is as exciting as ever.”

Brighton performed with appropriate enthusiasm and fed from Hughton’s experience, heeding his call to stay alert from the beginning and take nothing for granted against League Two opponents with a penchant for surprises.

“We had to apply ourselves to show the difference,” he said, while admitting that he has been fortunate to field strong sides for the three rounds to date because of a lack of injuries. He made nine changes to face Coventry but it was hardly a case of throwing untested players in and two of the beneficiaries, Leonardo Ulloa and the £14 million debutant Jürgen Locadia, promptly scored. Brighton now have the kind of depth to sustain challenges on both major fronts.

“We are still learning about him,” Hughton said of Locadia, who had enough chances to score a hat-trick but looked sharp in his 76 minutes on the pitch. Hughton was gracious enough to remember that he also lost a cup final against – in further symmetry – Coventry, but Mark Robins’s side were given little chance to repeat the trick after going behind and Brighton, now five games unbeaten, appear to be gathering steam.

“What I do know is we are on a good run and have a good changing room,” Hughton said. “We have a lot of players involved and playing games. As a manager, you manage a team and there are good periods where there are good feelings in the group. We have that at the moment.”

1 Gerry Thornley: Wild reactions to this Ireland team as fickle as the wind
2 Dan Tuohy explains ‘rotten to the core’ comments
3 Cheltenham keeping a watching brief on coronavirus
4 Cian Healy out of remainder of Six Nations
5 R&A call for ‘common ground’ on golf’s distance debate
Real news has value SUBSCRIBE