Pulisic grabs his chance with hat-trick in Burnley rout 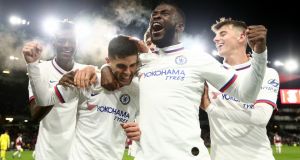 Christian Pulisic rewarded Frank Lampard’s decision to hand him a first league start since August as his first Chelsea goals came in the form of a hat-trick in a 4-2 win over Burnley at Turf Moor.

The United States international staked his claim for a more regular berth as he punished Burnley mistakes in the first half to put the Blues in firm control.

He then made it a perfect hat-trick as he headed in his third when the hosts could only half-clear a corner just before the hour-mark.

Late on came another sign that the bar for VAR overturning decisions may have been lowered with substitute Callum Hudson-Odoi booked for simulation after Michael Oliver initially awarded a penalty, but it did nothing to change the result.

This was a seventh straight win for Chelsea in all competitions, keeping them fourth in the Premier League table and now five points clear of fifth-placed Arsenal, who face Crystal Palace on Sunday.

Pulisic replaced Hudson-Odoi in the only change to the Chelsea side that recorded a notable 1-0 win over Ajax in Amsterdam on Wednesday, but that effort appeared to be in their legs in a lethargic start which saw Burnley doing most of the pressing.

But when Matthew Lowton stumbled on the ball just inside the Burnley half after 21 minutes, Pulisic pounced and raced towards goal, holding off the closing defenders to fire under Nick Pope to open his Chelsea account.

That opened up the game as Burnley immediately pushed forward.

Ashley Barnes, back in the side after a groin injury, spurned a couple of chances before Erik Pieters came close to an equaliser, with his 20-yard strike picking up a deflection to force Kepa Arrizabalaga into a superb reflex save.

Barnes then somehow missed from close range when Ben Mee headed a free-kick back across goal before Chelsea began to assert more control over the game.

Pulisic was at the heart of it again, forcing a fine save from Pope with a well-struck shot before seeing a close-range effort blocked by James Tarkowski.

But the £58million player got his second just before the break, with Chelsea again punishing a Burnley mistake.

Willian picked off Tarkowski’s loose pass and quickly played in Pulisic, who beat Pope with a right-footed shot that deflected off Mee on its way into the corner of the net.

Eleven minutes into the second half he had a hat-trick. Lowton could only half-clear Mason Mount’s corner and when the England midfielder sent the ball back in Pulisic rose to head into the far corner.

And before Burnley could gather their thoughts they were 4-0 down as Tammy Abraham found Willian in the right-hand channel and the Brazilian drilled a low shot beyond Pope.

Burnley could have crumbled but to their credit came forward again.

Just after the hour Rodriguez linked up with Barnes and raced towards goal, but Fikayo Tomori refused to give up the chase and made a superb sliding tackle in front of the watching England manager Gareth Southgate.

Reece James then replaced Marcos Alonso and was immediately in the thick of things as he made blocks from Ashley Westwood and McNeil in quick succession.

VAR had its moment in the game with 15 minutes to go. Oliver pointed to the spot when Hudson-Odoi fell under the attentions of Tarkowski and Lowton in the area, but Stockley Park intervened to overturn the decision.

As stoppage-time loomed Rodriguez strode forward and smashed home a shot from 25 yards before a second followed soon after when McNeil’s effort deflected off Tomori and in, a reminder that for all the threat they carry going forward, Chelsea still have work to do in defence.