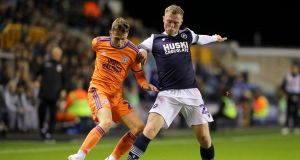 Ireland international Aiden O’Brien has confirmed that he is to leave Millwall with the 26-year-old striker saying that it is with “great sadness” that he will be leaving a club that he considers to be “family”.

Islington-born O’Brien, who scored on his debut for Ireland in 2018, played almost 200 games for the London club after initially joining as a 15-year-old, and scored 39 goals.

In an interview with local media, Millwall boss Gary Rowett acknowledged that the circumstances of O’Brien’s departure were difficult for a player who had clearly wanted to stay.

“Every player gets to a point where they need a change and a fresh environment – for the good of Aiden’s career he probably needs that,” he said.

“He’s been at Millwall a long time and the fact he has been injured towards the end of this season has been tough for him. He hasn’t had those last few games with the team and in front of the fans. It’s a really tough ending for him.”