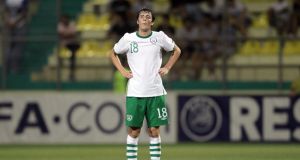 Joe Shaughnessy: has moved to Scottish Premiership side St Mirren following a spell with Southend in England. Photograph: Donall Farmer/Inpho

Former Republic of Ireland Under-21 international Joe Shaughnessy has returned to Scotland, signing for Premiership side St Mirren after a difficult season with Southend United.

The 28-year-old defender from Galway originally moved to Aberdeen as a teenager and later had a strong spell at St Johnstone where he became club captain. He returns to the Scottish top flight after a single season at Southend who have just been relegated from League One.

“He is a fantastic leader and a really good character as well,” says St Mirren’s Irish manager, Jim Goodwin. “He’s got fantastic experience in the Scottish Premiership already and played a huge part in St Johnstone’s success in recent years. All these boys we are bringing in fit a certain profile and Joe ticks every box.”