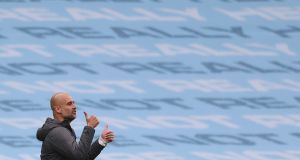 Manchester City’s two-year ban from the Champions League for a serious breach of Uefa’s financial fair play rules has been overturned by the court of arbitration for sport, which also reduced the club’s fine to €10 million(£9m) from €30 million.

However, on the central finding by the CFCB’s adjudicatory chamber that City’s Abu Dhabi ownership had disguised its own funding as independent sponsorship by the state’s commercial companies, Cas found: “Most of the alleged breaches were either not established or time-barred.”

As those were the most serious findings, that had resulted in the chamber banning City from European competition for two years, “clearly more significant violations than obstructing [UEFA’S]investigations, it was not appropriate to impose a ban on participating in Uefa’s club competitions for MCFC’s failure to cooperate with the CFCB’s investigations alone”, Cas said.

The quashing of the two-year ban represents a major victory for City’s hierarchy in the conclusion of this bitterly contested episode, and a defeat for Uefa and its semi-independent CFCB structures. No full judgment was issued by Cas, only a brief one-page press release, so the full reasons and explanations will not be made public for “a few days”, it said.

City said in a statement: “The club welcomes the implications of today’s ruling as a validation of the cub’s position and the body of evidence that it was able to present. The club wishes to thank the panel members for their diligence and the due process that they administered.”

City, whose executives had furiously denied wrongdoing and throughout a 20-month saga consistently accused Uefa’s processes and decision-makers of being biased against the club, had appealed to Cas after the sanctions were imposed in February. They said the process had ignored “a comprehensive body of irrefutable evidence”.

The Champions League ban, a most severe sanction, and a €30m fine were imposed by the CFCB after it concluded that City had committed “serious breaches” of Uefa’s FFP regulations “by overstating its sponsorship revenue in its accounts and in the break-even information submitted to Uefa between 2012 and 2016”.

Uefa said in response to Monday’s verdict: “Uefa notes that the Cas panel found that there was insufficient conclusive evidence to uphold all of the CFCB’s conclusions in this specific case and that many of the alleged breaches were time-barred due to the five-year time period foreseen in the Uefa regulations.

“Over the last few years, financial fair play has played a significant role in protecting clubs and helping them become financially sustainable and Uefa and ECA [the European Club Association] remain committed to its principles.”

The lifting of the ban will come as a huge relief to City in terms of status, finance, their prospects of retaining Pep Guardiola as manager beyond the end of his contract next season and their hopes of holding on to key players and attracting signings. Kevin De Bruyne had publicly said he would review his situation if the ban was upheld.

The guilty finding followed an investigation sparked by the publication of “leaked” emails and documents by the German magazine Der Spiegel in November 2018. A selection of the published City documents appeared to show that City’s owner, Sheikh Mansour bin Zayed al-Nahyan of the Abu Dhabi ruling family, was mostly funding the huge, £67.5m annual sponsorship of the City shirt, stadium and academy via his country’s airline, Etihad. One of the leaked emails suggested that only £8m of that sponsorship in 2015-16 was funded directly by Etihad and the rest was coming from Mansour’s own company vehicle for the ownership of City, the Abu Dhabi United Group.

The Cas judgment effectively states that this, the alleged “disguise of equity funding as sponsorship contributions”, was not established by the evidence it heard.

FFP rules are aimed at encouraging clubs to break even and spend only money they make in revenues, not pay excessively for players in wages and transfer fees subsidised by outside funding from owners. The system means that sponsorships are an important element of clubs’ financial reporting and ability to sign players, and must truly be commercial revenues from outside companies, not disguised owner funding.

City refused to comment or engage with initial inquiries from Uefa and the CFCB’s investigatory chamber, on the basis that the emails had been leaked or stolen. Der Spiegel, in its extensive coverage, had anonymised its source as “John”, and quoted him saying he had not hacked computers to obtain the emails.

Shortly after Der Spiegel’s publication, the source was identified as a Portuguese national, Rui Pinto, who was arrested shortly afterwards and has been charged with 147 criminal offences, including hacking and other cybercrimes, which he denies. The charges relate to Portuguese football clubs and other organisations, not to the “leaks” of City’s or Uefa’s emails. - Guardian