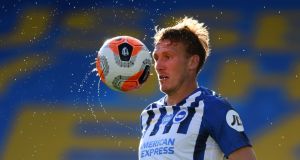 Job done for Graham Potter, although the Brighton manager would be the first to accept it wasn’t exactly a classic. A point from a fixture that closer resembled a pre-season match in terms of intensity means his side can officially start planning for an unprecedented fourth season in the top division of English football having somewhat limped over the line in recent weeks.

Yet having lost their last three matches here and conceded 11 goals, Potter will at least be grateful that his defence stood firm against an improved performance from Newcastle after the break as Steve Bruce’s side pushed for a victory that neither team really deserved. It means the visitors have still failed to beat Brighton in all six Premier League matches they have contested.

Both sides came into this match aiming to recapture some of their earlier season form that has already ensured they will be back in the Premier League when the new campaign gets underway in what is expected to be a matter of weeks.

But having yet to confirm their survival mathematically, even if it would have taken the unlikely scenario of Aston Villa making up a whopping goal difference of 11 from their final two matches, in theory Brighton were the side most in need of a result here before kick-off. Potter made three changes from the side that drew with Southampton in their last match.

Newcastle’s last trip to the south coast at the beginning of the month ended in a 4-1 victory at Bournemouth thanks to three assists from the glittering boots of Allan Saint-Maximin. The Frenchman was characteristically to the fore during the opening exchanges after Bruce had opted to make only two changes from the team that lost at home to Tottenham last week, with the full backs Javier Manquillo and Danny Rose coming in.

Despite the promptings of Saint-Maximin, however, a lack of cutting edge has been Newcastle’s weakness this season and it was the hosts who created the only real chances of the first half.

Neal Maupay’s shot from a tight angle struck a post inside the opening three minutes, although it would not have counted given the linesman had already flagged him offside. Maupay and Leandro Trossard later combined to call Martin Dubravka into action for the first time just after the half-hour.

An announcement earlier in the day that Newcastle have agreed a “long-term commercial agreement” with the betting company Fun88 to continue sponsoring their shirts was not exactly the news supporters wanted to hear from the boardroom.

The Premier League has now been considering the proposed takeover by Saudi Arabia’s Public Investment Fund for more than 100 days but with no resolution seemingly in sight, Bruce’s side struggled to lift their spirits on the pitch as they failed to register a shot on target in the first half.

Things had to improve after the break and Newcastle finally managed to force Mat Ryan into making a save five minutes in following an instinctive effort from Miguel Almirón. The Argentina midfielder Alexis Mac Allister was then introduced by Brighton as Potter attempted to add some creativity to all the possession his side had enjoyed.

Even with his lack of experience in the Premier League, the former Stoke midfielder who made his name as a coach in Sweden is currently second favourite with the bookmakers behind Sean Dyche to replace Gareth Southgate as England manager whenever he leaves his post.

Before that becomes a serious prospect, Potter faces a real test of his recruitment skills this summer if Brighton are to build on the progress they have made this season, although they could have won this match late on had Trossard made the most of Lewis Dunk’s clever knockdown after Dubravka had earlier tipped Adam Webster’s swerving shot over the bar.

Andy Carroll almost made them pay for their profligacy in the final moments but, after the substitute rose to meet a corner at the far post, the ball cannoned off the former England striker’s face and went wide. It was definitely one of those games. – Guardian