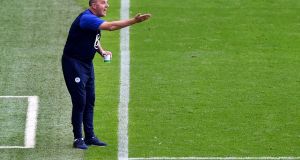 Paul Cook: the Wigan Athletic manager is facing an anxious wait as his club have appealed a 12-point deduction for entering administration. Photograph: Nathan Stirk/Getty Images

At least two Championship clubs are set to face an agonising wait over whether they will drop into League One even if they finish in the relegation zone because of outstanding disciplinary cases regarding Wigan, Sheffield Wednesday and Derby.

The fate of several clubs hinges on the outcome of three independent hearings, none of which is expected before the final league matches on Wednesday.

Wigan, who are 13th, have appealed against a 12-point deduction for entering administration on the grounds of “force majeure”, which typically relates to exceptional circumstances beyond the control of involved parties.

Wigan launched their appeal on July 6th and, under EFL rules, it must be heard within 21 days. They are 10 points clear of the relegation zone and if they beat Fulham and at least one of Charlton and Luton lose, Paul Cook’s side would escape relegation, even if – as expected – the punishment is imposed.

Wednesday, eight points above the bottom three, were charged with misconduct in November regarding the £60m sale of Hillsborough to the owner, Dejphon Chansiri. The charge relates to “how and when” the stadium was sold to Chansiri, and the inclusion of the profits in the 2017-18 accounts. The club has said EFL executives authorised the sale, that the charges are “unlawful” and that it is ready to “vigorously defend” its position.

Derby, 13 points above the relegation zone, were charged by the EFL in January with breaching the financial regulations of the Championship following a review of the sale of Pride Park to the club’s owner, Mel Morris. They too have strenuously denied wrongdoing, and have said they “adhered to the profit and sustainability rules”.

The fate of the trio of clubs rests with independent commissions, which will determine the severity of sanctions in the event of any guilty findings. In guidelines presented to clubs by the EFL in September 2018 the template for breaches of spending regulations was a maximum deduction of 21 points – 12 for the breach, plus a further nine if it was an aggravated offence. Other possible penalties include heavy fines. There is an appeals process.

In March 2019 Birmingham were docked nine points for a breach of the EFL’s profitability and sustainability rules.

The regular season ends on Wednesday but the “transfer of membership”, when the 2019-20 season will be formally concluded by the EFL, will take place after the Championship play-off final on August 4th.

The bottom seven teams remain at risk of relegation, including Barnsley. Paul Conway, the Barnsley co-chairman, has made clear the club would consider legal action if they are relegated and the outstanding disciplinary cases are not completed. Last week the Barnsley first-team coach, Adam Murray, bemoaned clubs being kept in the dark.

“To be where we are in the season and not know the black and white of the situation is strange, to put it nicely,” he said.

Wigan’s administrators have sanctioned the sales of the teenagers Jensen Weir and Alfie Devine to Brighton and Tottenham respectively to help cover wages, having made 75 support staff redundant.

Weir, an 18-year-old midfielder who became the club’s youngest-ever player, will reunite with his father, David, who is on Brighton’s coaching staff, while the 15-year-old midfielder Devine was regarded as one of Wigan’s most exciting prospects. The 18-year-old Joe Gelhardt could also depart, with Leeds among his suitors. - Guardian

Irish Open 2020: Galgorm Castle hole-by-hole guide 06:00
Rugby Stats: Saracens superiority at scrum time key to victory over Leinster 06:00
Irish Open 2020: Four players to watch out for 07:01
Marty McGrath and Ederney hoping to bridge a long gap in Fermanagh 06:00
Sonia O’Sullivan: 20 years on and memories of that Sydney final flood back 06:00