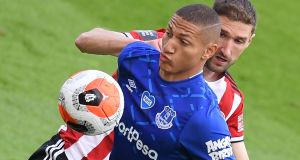 If Dean Henderson was hoping for another chance to impress his parent club Manchester United with his shot-stopping skills he will be disappointed with his performance against Everton. The goalkeeper did not have a save to make in the first half, so tame were the visitors in attack, then having lulled their opponents into a false sense of security Everton came up with a set-piece winner in the first minute of the second to which Henderson had no answer.

It is still debatable how much Everton have actually improved under Carlo Ancelotti, though at least Richarlison’s goal prevented any repeat of United’s win at Goodison last September when Marco Silva’s side were losing against newly promoted teams for fun.

So solid have Sheffield proved in the top flight it is easy to forget this is still their first season back, and though this result will not help their quest for European football they are still going to finish higher than many more established sides.

Like Everton, to name one. Ancelotti’s team found it difficult to beat the Sheffield press at first, constantly turning backwards and rarely crossing the halfway line in possession. All the home side had to show for their early pressure were a few free-kicks and corners, from some of which Ollie Norwood tried to test Jordan Pickford’s positioning though neither goalkeeper was called upon to make a save from open play in the first quarter.

Theo Walcott did get himself into a threatening position on one of Everton’s rare forays upfield, though after Gylfi Sigurdsson had picked him out in the area he merely rolled the ball across the face of goal.

Dominic Calvert-Lewin might have done better when André Gomes broke up a Sheffield attack on the right and sent an accurate pass to find him in the middle, but the striker’s first touch was too heavy and Henderson was able to collect easily.

Pickford was finally called into action four minutes before the break, diving to his right to tip away a shot from Chris Basham, seconds before Sheffield had a scare at the other end when Calvert-Lewin hit a post. The striker is often accused of not being clinical enough, and having climbed well to reach Walcott’s cross at the far post he needed to be a little more precise from a couple of yards out.

While Everton would barely have deserved an interval lead, by that stage they had at least worked out how to play through the Sheffield midfield to set up one or two promising openings.

Henderson came out early during the break for a little extra ball work, so little had been his involvement in the game, yet in less than a minute after the restart he was picking it out of his net.

From a Sigurdsson free-kick 30 yards out Richarlison managed to get in front of Enda Stevens and direct a superb headed flick into the bottom corner. There was nothing any goalkeeper could have done because of the header’s power and accuracy, and from the way Sigurdsson celebrated it looked like finding Richarlison had been his intention all along. The Brazilian had rarely looked dangerous from open play, but when the chance came he took it with an alacrity that left the home side momentarily stunned.

Everton began to play a bit more once ahead, with Gomes showing up well in midfield, and after an hour Henderson was needed to save from Calvert-Lewin. They should have had a second goal 10 minutes from the end with Walcott again free in the area, but this time his low cross could not pick out Richarlison or Calvert-Lewin.

Sheffield kept looking for an equaliser, with Billy Sharp miscontrolling their best chance, though for a team with the 18-year-old Jarrad Branthwaite making his first start at centre half, Everton saw the game out safely enough. – Guardian