Ajax handle the heartbreak with philosophy of ‘live in the future’

Chelsea have work cut out against opponents with point to prove 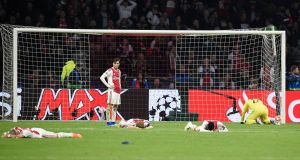 The general consensus was that Ajax had one shot and missed the target spectacularly. Photograph: John Thys/AFP/Getty Images

The challenge for Ajax is forgetting about the last time a London club paid them a visit. The memories remain raw, however, and moving on has not been easy since their defeat by Tottenham last season. Ajax had been on a wild ride, knocking out Juventus and Real Madrid en route to their first Champions League semi-final since 1996, and a side packed with homegrown talent were on the verge of a magnificent achievement until Spurs launched one final, desperate attack, the ball ran through to Lucas Moura and the Brazilian silenced the Johan Cruyff Arena with his third goal of a crazy night.

It was a horrible way for Ajax to lose and it was difficult not to feel their story had ended prematurely. While the Dutch side have won four European Cups, the last of them back in 1995, the latter stages of the modern Champions League have mostly been off limits to clubs from leagues the size of the Eredivisie. The general consensus was that Ajax had one shot and missed the target spectacularly, throwing away a 3-0 aggregate lead and missing countless chances to kill Spurs off before Moura’s stoppage-time winner.

Then came the talent drain. Frenkie de Jong had already agreed to join Barcelona at the end of the season and the elegant midfielder was followed out of the door by Matthijs de Ligt, with Juventus winning the race to sign the 20-year-old centre-back. Kasper Dolberg and Lasse Schöne have also gone, joining Nice and Genoa respectively.

Yet Ajax, who host Chelsea in Group H this evening, are accustomed to selling their stars. It happened to them after losing the Europa League final to Manchester United in 2017, a defeat followed by the lucrative sales of Davinson Sánchez and Davy Klaassen, and it will probably happen again soon. Plenty of clubs from Europe’s top leagues will be keeping tabs on André Onana, Donny van de Beek, David Neres and Hakim Ziyech, the wonderfully creative Moroccan winger.

It is a way of life at Ajax and the key is acceptance. Staying fresh helps them absorb all the sales and they have continued to flourish since losing De Jong and De Ligt. Progress has been maintained and Ajax remain unbeaten this season, top of the Eredivisie after winning eight of their first 10 league games and impressive in Europe since winning their Champions League qualifier against Apoel Nicosia in August.

Another run is not out of the question given that Ajax have made a dominant start to their European campaign, opening with consecutive 3-0 victories over Lille and Valencia. Crucially, they kept their progressive manager, Erik ten Hag, in the summer and the 49-year-old Dutchman has made sure there has been no hangover from the Spurs game. It helps that this is a club with a clear philosophy, built on Cruyff’s footballing vision, and have an academy that will always produce capable footballers. Sergiño Dest, an 18-year-old right-back, has stepped up this season.

“Last year was last year,” Ten Hag said before facing Chelsea. “We are building a new team. Now we have to step up and become better. Sometimes you fall down but you also have to step up again and be better. That’s only possible when you play out of your philosophy.

“We live in the future, we live for now and we have to perform and this team is a different team. It’s a little bit different also in the tactics but that’s normal because you lose players and the players you get in are different types. I believe we are still a strong team.”

Ajax will start as favourites against Chelsea, who have three points from their opening two fixtures. They still have the thrust of Van de Beek in midfield, the wing wizardry of Ziyech, the speed of Neres and the craft of Dusan Tadic, a man transformed since leaving Southampton last year. Quincy Promes has done well in attack since his £14m move from Sevilla and while replacing a once-in-a-lifetime player like De Jong was a thankless task, Ajax have bolstered their midfielder, bringing in Edson Álvarez and Lisandro Martínez.

Chelsea will have their work cut out against opponents with a point to prove. Tottenham shut one chapter but Ajax trust that a new one is just beginning.