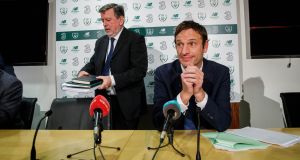 Donal Conway says that he continues to see the issue of government funding as one linked to governance rather than personalities but he admits that the departure of John Delaney from the association has been “welcomed” in government circles.

There is a continuing sense that his Conway’s departure would be too but the association’s acting president insists that he has been told by Sport Ireland that the question is one of reform and that once that process is complete then public money should start to flow again, regardless of who is leading the organisation.

“The correlation here is between real progress with governance and the resumption of funding,” he said after the FAI’s Council had been updated on the scheduling of the various reports into its finances that are coming down the track. “The personal side of it, I’m not interested in. I think all of this should be de-personalised.

“I talk to Sport Ireland regularly and they have made it clear that there are key milestones we must pass before there will be a resumption of funding.”

Asked about the long-time CEO’s exit a month ago, he said that: “It’s very difficult for me to talk about the John Delaney situation. I’m not trying to be evasive, but it is, it’s a confidential arrangement.

“I don’t go talking to government specifically about this, be it the department or Sport Ireland, but my sense is that it is welcomed that there has been a termination and separation between the association and the former CEO.”

Earlier, at the council meeting, delegates from the various strands of the game were told that both the Kosi and Mazars reports should be delivered by the end of November. The former, commissioned by Sport Ireland with the intention of examining the organisation’s finances in forensic detail should land around the middle of the month with the association’s own Mazars report to follow within a couple of weeks.

The organisation’s reconvened AGM may not now take place until the start of December, a number of weeks later than had been expected. It is at the AGM that the association’s accounts for 2018 will be published and details of the severance deal done with Delaney are expected to be made public.

The process intended to facilitate the appointment of independent directors is nearly complete, the council members were told, with a shortlist in place and final consideration by the association’s new nominations committee expected to take place over the next few weeks.

Former Olympian, Olive Loughnane, is to be a member of that, along with Conway and fellow board member Richard Shakespeare. Former trade unionist Peter McLoone is also to sit on it, while Christina Kenny, who has been put forward by the recruitment firm, Amrop, will be the fifth and final member.

The association’s finance committee, meanwhile got two new members with Andrew Doyle, a prominent commercial solicitor and owner of Shelbourne, and Larry Bass, who heads up television production outfit Shinawil and is the chairman of Cabinteely.