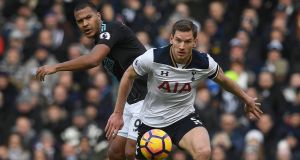 Tottenham Hotspur are set to be without Jan Vertonghen for up to two months after the Belgium defender underwent scans on the ankle ligament injury sustained in Saturday’s thrashing of West Bromwich Albion.

The tests on the joint revealed a tear lying between grades two and three, damage which had left Vertonghen in tears as he departed the turf at White Hart Lane and would normally rule him out at the very least until mid-March. Rehabilitation will begin once the swelling has receded on the left ankle and Mauricio Pochettino is preparing for life without the influential defender.

Spurs have found their best form of the season over recent weeks, winning seven matches in succession in all competitions to rise to second in the Premier League table.

The adaptable and dependable Vertonghen has been a key element in that and is distraught at the timing of the injury. At the same stage last year he injured medial knee ligaments, having been elbowed in the face by Crystal Palace’s Connor Wickham, and was ruled out for over 11 weeks at a critical stage of the season.

This time he will sit out Saturday’s trip to Manchester City, as well as the game at Liverpool in mid-February and the Europa League tie with the Belgian club Gent next month.

Tottenham have utilised a back three over recent weeks and Vertonghen’s absence may see either Kevin Wimmer or Ben Davies, who plays in that system with Wales, drafted in alongside Eric Dier and Toby Alderweireld across the backline. At present, Pochettino is not inclined to enter the transfer market in search of a stop-gap defender. Guardian Service