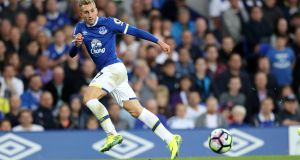 Gerard Deulofeu could be leaving Everton in the January window. Photograph: Getty Images

AC Milan are attempting to sign Everton’s Gerard Deulofeu on loan for the remainder of the season.

The 22-year-old enjoyed a successful loan spell at Goodison Park during the 2013-14 season and rejoined permanently from Barcelona in 2015.

However, Deulofeu has made just 13 appearances since Ronald Koeman’s summer arrival and could now leave this month, with Milan confirming their interest in the Everton winger.

“We are talking with Everton, we have not arrived at a point (of agreement), ” chief executive Adriano Galliani said, as reported by Gazzetta dello Sport.

“Everton knows we can do loans or loans with right of redemption and not an obligation. In addition there are the pro-Barcelona clauses.”

Aitor Karanka’s Middlesbrough have also been linked with a January move for Deulofeu.

Meanwhile Swansea have signed Tom Carroll on a busy day of transfer activity for the Premier League strugglers.

The England Under-21 international, who made 18 appearances during a Swansea loan spell two seasons ago, had made only one brief appearance in the Premier League at Spurs this season.