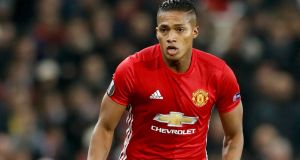 Antonio Valencia will remain at Manchester United until 2018 after the club triggered the one-year extension clause in his contract.

The 31-year-old has become a key player at Old Trafford since joining from Wigan in 2009.

Valencia has established himself as Jose Mourinho’s first-choice right-back and now been rewarded with an extended stay at United.

Valencia has made 23 appearances for United this term under Mourinho, who attempted to bring him to Real Madrid during his time in Spain.

“I tried to sign Antonio a number of years ago, when I was at Madrid,” Mourinho told MUTV in November.

“Even though he was not playing right-back at the time, I thought he could be phenomenal in that position. As it was, United told me ‘no chance!”’

He added: “I am not surprised by his form this season.

“He has been clean of injuries, save for an operation on his arm which did not keep him out for long, and I have also been able to keep him fresh by resting him in certain Europa League games.

“I think he is the right-back to give us the maximum we can in terms of our attacking football.”

1 Ireland Slam England at the Gardens to open up Grand ambitions
2 TV View: Roy Keane but Daragh’s keener as Late Late fails to shoot the lights out
3 ‘Manchester United are lucky to have you’: Klopp responds to Donegal schoolboy’s letter
4 Solskjær backs Martial to get 20 goals for Manchester United for first time
5 Eddie Jones: back three will deal with Irish aerial threat
Real news has value SUBSCRIBE