Is Scott Hogan the answer to West Ham’s 32 strikers in 7 years? 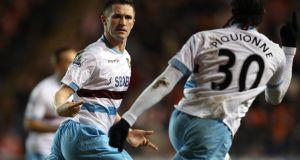 Robbie Keane and Freddie Piquionne were at one time touted as the answer to West ham’s striking problems. Photo: Getty Images

Haggling with Brentford over the asking price for Scott Hogan, testing Sunderland’s sense of humour with a £4m offer for Jermain Defoe, steeling themselves for bids for the mutinous Dimitri Payet, waving goodbye to Simone Zaza and preparing to point Jonathan Calleri to the exit, how West Ham United savoured the majesty of Andy Carroll’s overhead kick in Saturday’s 3-0 victory over Crystal Palace. For a team who had to wait until November 27th for a striker to score this season, Carroll’s wonderfully acrobatic goal lifted the mood at the London Stadium and provided a timely tonic after Payet’s revolt.

Yet before celebrating too much about showing Payet that they can win without him, West Ham would be wise to pause and consider a statistic that should make David Sullivan and David Gold wince. In the seven years since the pair bought the club, West Ham have completed 32 deals for new strikers for four different managers and the numbers make for grim reading. Between them those players have managed 125 goals in 641 games.

Those figures are a damning indictment of the piecemeal way West Ham have gone about trying to fill such an important position. From mysterious South American imports such as Brian Montenegro and Wellington Paulista, both of whom disappeared without a trace, to forgettable loan signings such as Marco Borriello and Marouane Chamakh, and from flops like Modibo Maïga to stopgaps like Nikica Jelavic, their underwhelming attacking purchases have too often undermined their attempts to grow.

Of those 32 strikers, only four have managed double figures in terms of goals: Diafra Sakho (20 in 52 games), Carroll (26 in 101 games), Frédéric Piquionne (11 in 62 games) and Enner Valencia (10 in 68 games). Ignore strikers who were signed for the youth team and include Calleri and Zaza, and almost a third left east London without scoring. Once Carroll’s injury record is taken into account, only Sakho, signed for £3.5m from Metz in 2014, and Demba Ba, whose seven goals following his arrival from Hoffenheim in January 2011 were not enough for Avram Grant’s side to avoid relegation to the Championship, can be viewed as successes.

Since their return to the top flight in 2012, only one of the seven strikers who have joined on loan, Carroll, has earned a permanent transfer. In their drive to seek out bargains, West Ham have frittered away too much time and money on strikers who never looked likely to make the grade, leaving them stuck on a loop of short-termism as they find themselves dipping back into the market for the next unsatisfactory quick fix. One mistake simply leads to another.

Payet’s desire to leave is a consequence of unfulfilled promises. After West Ham came close to qualifying for the Champions League last season before squeezing into the Europa League with a seventh-place finish, Sullivan and Slaven Bilic agreed that the priority for the summer had to be the acquisition of a striker with the potency to lift them into the top four. Having finished as the fourth-highest scorers in the league, it was a solid assessment of the side’s potential and Sullivan spoke bullishly last May about the need for a striker who could score 20 goals a season, while also raising expectations by talking about imminent £20m and £25m bids for players.

Goal-shy forwards have been a perennial weakness. Only the midfielder Kevin Nolan (10 in 2012-13) and Diafra Sakho (10 in 2014-15) have hit double figures in a single Premier League season in the Sullivan and Gold era. Getting that striker was easier said than done, of course, bearing in mind that the best are usually found at the leading clubs. It is rare to find one away from the elite in England. No player has ever scored 20 league goals in a Premier League season for West Ham.

Leaving Upton Park for the London Stadium is meant to catapult West Ham into the next level, however, and they were keen to make a marquee signing last summer. “Whatever happens, we’ll bring a top striker in,” Sullivan said. “It’s a statement of intent.”

What did happen, however, is that West Ham found that Lyon’s Alexandre Lacazette and Marseille’s Michy Batshuayi had set their sights higher, while talks with Milan’s Carlos Bacca went nowhere, and the arrivals of Calleri, Zaza and Ashley Fletcher were the universe’s way of telling Sullivan that actions speak louder than words. When West Ham did break their transfer record by spending £20m on Swansea’s André Ayew, the money went on an overpriced winger.

Payet cannot be blamed for deciding that he has had enough, even though there is little to admire about the midfielder downing tools in his attempt to force a move to Marseille. While Fletcher has shown promise since his free transfer from Manchester United, Calleri’s and Zaza’s loan spells have been disastrous and long-term injuries to Carroll and Sakho meant that West Ham were often forced to play without a striker before Christmas.

Calleri has failed to score in nine appearances and the 23-year-old Argentinian is set to return to Deportivo Maldonado, while the Zaza deal was structured in a way that unfairly raised the pressure on the Italy international. Having paid a £5m loan fee to Juventus, West Ham would have had to buy Zaza for a further £20m if he had reached 14 Premier League appearances. The 25-year-old barely threatened a goal in 11 appearances in all competitions before departing for Valencia.

The addition of a lethal striker alone would not eradicate all of West Ham’s flaws. Bad defending, muddled tactics, the absence of a right-back and a shortage of resilience have been just as harmful as the lack of a finisher. Sunderland are in relegation trouble despite Defoe’s 11 goals and the same applies to Crystal Palace, who spent £32m on Christian Benteke. West Ham, because they played with superior coherence last season, were able to spread the goals around effectively.

Yet achieving that balance was possible only because of forwards creating space for their team-mates. They are a different side when Sakho, strong, fast and instinctive in the area, is fit, but the Senegalese soon succumbed to injury after his early header in the 1-1 draw at Manchester United in November.

That hole in Bilic’s attack has placed a heavy strain on the side. They have won one game in which their opponents have scored – five of their seven victories have been by 1-0 scorelines – and they have recovered two points from losing positions.

Losing to Palace might have dragged them back into the relegation picture. Instead they are 10 points clear of the bottom three, having displayed character and quality in the face of adversity, and fine performances from Michail Antonio, Manuel Lanzini and Sofiane Feghouli against Sam Allardyce’s struggling side offered hope for the future. Yet while Carroll had a fine game, he is their only fit striker and once again they find themselves trying to bolster their attacking options in the January window.

We have been here before. Shortly after Sullivan and Gold’s arrival in January 2010, there was talk of Ruud van Nistelrooy being offered a £100,000 a week contract. West Ham ended up with Benni McCarthy, Ilan and Mido. Only Ilan contributed anything, two of the unheralded Brazilian’s four goals earning four points that were enough to stave off relegation, but staying up with 35 points was no cause for celebration. Robbie Keane and Ba arrived a year later, but West Ham went down.

The club’s parlous financial situation meant that Sullivan and Gold were afforded some slack during that period and West Ham immediately bounced back under Sam Allardyce. Yet history has a way of repeating itself. Having lost Carroll to a nasty foot injury after buying him for £15m from Liverpool, West Ham began the 2013-14 season with Maïga as their only striker. They were reduced to signing two free agents: Carlton Cole, having released him a few months earlier, and Mladen Petric, who made four substitute appearances without scoring a goal. Borriello, a 31-year-old Italian forward, arrived on loan from Roma in January and left after appearing twice.

Something to consider as West Ham mull over whether to meet Brentford’s £15m asking price for Hogan, a 24-year-old forward who has scored 14 goals in the Championship this season, and whether £4m might be a touch too low to convince Sunderland to part with their best chance of staying up, is that Sullivan and Gold have rarely used the winter window productively. None of the 10 strikers signed in January has managed a full campaign.

None of this would matter as much if they were still at Upton Park, but West Ham convinced their supporters that staying in E13 would have condemned them to irrelevance. Although it is far too early to offer any definitive judgments about the wisdom of moving to Stratford, there must be evidence of a shift in the board’s mentality soon. After six months in their new home, West Ham’s most prized asset wants to leave and they will find it hard to attract new punters to the London Stadium without players of Payet’s calibre on show. Talk is cheap.

West Ham strikers signed since Sullivan and Gold took over

West Ham relegated to the Championship in May 2011

West Ham promoted to the Premier League in May 2012

16. Wellington Paulista – loan in January 2013, 28 at time of arrival, 0 goals in 0 appearances, loan cancelled at end of season