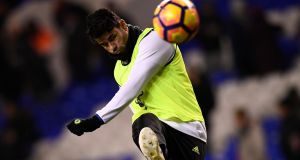 Diego Costa took a full part in training with the Chelsea first team on Tuesday as the likelihood of a move to China dwindled.

It is understood that Costa was involved as his Chelsea team-mates returned following two days off after Saturday’s win at Leicester.

Head coach Antonio Conte said the 28-year-old striker was absent from that game with a back problem which saw him miss three days of training last week.

And Conte refused to publicly comment on reports of a disagreement with his top scorer, whose solitary training sessions on Sunday and Monday were linked to his recuperation, Chelsea said.

Costa had been linked with a mega-money move to Tianjin Quanjian.

Chelsea and owner Roman Abramovich are determined to keep the Spain striker, who has scored 14 Premier League goals in 19 games this season.

And the Chinese Super League club’s owner on Tuesday said that Chelsea’s desire to keep the striker until the end of the season and the new limit on foreign imports to China, with three permitted in matchday squads, will scupper a deal.

Tianjin’s billionaire owner Shu Yuhui told Tianjin TV, according to Sina Sports: “This situation has brought a change to our signing plans.

“If (the rule) had been ‘4 +1’ as in the past, then we would have made a big investment this year, but now it seems to be changed to three.

“The online reports about Costa, it’s true we’d like him, and we made an offer for (Edinson) Cavani and were deep in negotiations.”

The news may be a boost to Chelsea’s Premier League title hopes, but the subject of Costa’s future will not go away.

The Independent on Tuesday reported that Atletico Madrid, Costa’s former club, and Barcelona could try to sign the Brazil-born Spain striker this summer.

Costa signed a five-year deal on his arrival from Atletico in July 2014 for £32m.

He was repeatedly linked with a return to Atletico after being troubled by hamstring problems and disciplinary issues in his first two seasons at Stamford Bridge.

Costa this season admitted he had wanted to leave, before stating he was happy.

But it was widely reported on Monday that he recently rejected a contract extension on improved terms.

Chelsea, who have a seven-point lead at the top of the Premier League, next play at home to Hull on Sunday.

The first team returned to training with an afternoon session at their Cobham training base.

Conte has said if there were any issues with players, he would resolve them behind closed doors.

Shu, who recently met with Costa’s agent Jorge Mendes, claimed he was interested in signing Karim Benzema of Real Madrid and Cavani of Paris St Germain.

Chelsea and PSG were reluctant to sanction a mid-season transfer, so Tianjin were looking elsewhere. China’s transfer window is open until February 28th ahead of the March season start.

“We couldn’t afford to wait half a season,” Shu added.

Radamel Falcao of Monaco and Benfica’s Raul Jimenez — two of Mendes’ clients — had been set to move to Tianjin before the rule was introduced, Shu says.

“Mendes came to my home a few days ago and we also had ideas about Costa, but in the process were ready to sign two players, the contracts were done, the price was good — Falcao and Raul Jimenez,” Shu added.

“The contracts were ready, the two players ready to sign, and then we get the news about the salary limits and restrictions on foreign players, so that made us change.”

1 Rory McIlroy admits Portrush nightmare was catalyst for his return to the top
2 Garry Ringrose to stay with Leinster as he signs two-year central contract
3 ‘For 25 minutes I ran out of oxygen’: Pepe Reina on his coronavirus battle
4 Karen Robinson Walton: I am looking at him. I say ‘Benjamin, what have we done?’
5 USA Rugby files for bankruptcy as revenues dry up
Real news has value SUBSCRIBE