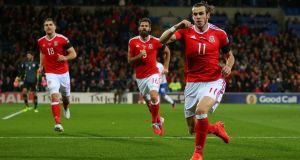 Gareth Bale of Wales celebrates after scoring to make it 1-0 during the FIFA 2018 World Cup Qualifier between Wales and Serbia at Cardiff City Stadium. Photo: Catherine Ivill - AMA/Getty Images

Welsh supporters say that they are “outraged” by their allocation of 3,300 tickets for the World Cup qualifier in Dublin on March 24th with the Football Association of Wales (FAW) having secured fewer tickets for that game than Irish supporters will get in Cardiff.

“We’re outraged really,” Vince Alm of Wales fan group FSF Cymru had told Wales Online before his fears regarding the numbers involved had actually been confirmed by the FAW on Tuesday morning.

“We’re really disappointed. We’re normally offered 10 per cent on a reciprocal basis. The gentlemen’s agreement has always been 10 per cent.”

As things stand, the Welsh will get around six per cent of the capacity at the Aviva stadium while the FAI has been guaranteed slightly more tickets, around 3,500, which would equate to just over 10 per cent of the available seats should the game go ahead at the Cardiff City stadium.

That has yet to be confirmed with a move to the far larger Principality (Millennium) Stadium still possible in the event that the match, the final group game for both sides, proves to be a qualification decider. The 74,000 capacity at the larger ground would obviously give more Irish fans a chance of attending the game (which, as things stand, would almost certainly be heavily oversubscribed here) and potentially generate far more revenue for the host association but Welsh supporters would clearly be unhappy by such a move.

“We want to play at our home stadium, which is the Cardiff City Stadium,” says Alm. “It’s not as big as the Aviva but that’s where we’re at and they should respect that.”

The sense here had actually been that the Welsh association had been happy enough with the deal reached with their Irish counterparts in terms of numbers although Ian Gwyn Hughes, the organisation’s Head of Public Affairs was fairly ambiguous regarding the official view on the allocation, saying only that: “We’ve spoke with them (the FAI) and that’s the allocation they’ve given us.”

1 On healing and wild hurling: The re-education of Diarmuid Lyng
2 Few, if any, have given as much to Munster as Garrett Fitzgerald
3 ‘Your father works for my father’: Schools rugby turning toxic in the stands
4 Triple bogey costs Rory McIlroy as Adam Scott prevails at Riviera
5 Wexford best the weather and Kilkenny on a mad day to be hurling
Real news has value SUBSCRIBE
Crossword Get access to over 6,000 interactive crosswords