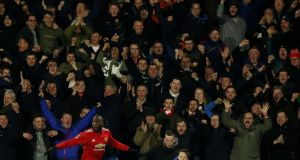 While the decision to utilise technology and aid officials has been widely embraced, the trial period has not been without its hiccups in the English game and beyond.

The teething troubles continued as Juan Mata saw an effort cancelled out for the narrowest of offsides – with some strangely skewed lines superimposed on the screen – but Lukaku goals early in each half ensured United progressed with a 2-0 fifth-round win at Huddersfield.

The Belgium striker showed skill, strength and balance to put Jose Mourinho’s men ahead inside three minutes at the John Smith’s Stadium, then raced through to put the tie out of sight in the 55th minute.

However, this was another uncomfortable trip to Huddersfield for a United side whose first dalliance with VAR was a controversial one.

As well as communication issues inside the John Smith’s Stadium after Mata netted from an acute angle, the decision to chalk off the goal by VAR Neil Swarbrick raises serious debate over the definition of a “clear and obvious error”.

United will be relieved it did not come back to haunt them after an unconvincing first-half display in West Yorkshire, despite making a superb start.

Mourinho made changes with an eye on the midweek Champions League trip to Sevilla and one of those sent an expertly-weighted through-ball for Lukaku.

The Belgium striker still had work to do after collecting Mata’s pass, but he effortlessly jinked past Christopher Schindler and sent a smart finish into the bottom corner.

Things would go downhill for the visitors from there as Town rallied and looked to secure another memorable result against United.

Philip Billing tried his luck from distance as David Wagner’s hungry side continued to agitate Mourinho, whose side lacked fluency, cohesion and creativity but appeared to have snatched a second goal.

Ashley Young found Mata with a smart low pass and the Spaniard went past Jonas Lossl to slot home from an acute angle.

However, referee Kevin Friend waited with his finger to the earpiece during celebrations that had subsided by the time he could confirm the goal would not count due to offside called by VAR.

The decision to cancel out Nemanja Matic’s goal was much simpler, but the Mata goal caused consternation that is sure to rumble on.

Van La Parra’s miskick and a Huddersfield penalty appeal after half-time was followed by a superb United breakaway goal.

Lukaku started the move after a Huddersfield corner came to nothing. He passed to Alexis Sanchez and raced onto the return ball, bearing down on goal before smartly tucking home.

United looked to build on that second goal and, while Lukaku had an attempt blocked, most of their promising moves were breaking down.

Mourinho made substitutions as the sting was taken out of the game, with Billing denied by Romero and Steve Mounie directing an acrobatic attempt wide towards the end.