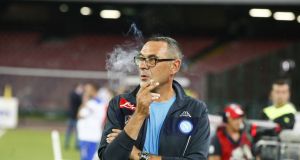 Maurizio Sarri is expected to leave Napoli to take over at Chelsea. Photo: Carlo Hermann/Getty Images

At last, Chelsea can see “a fumata bianca”. In the lexicon of Italian football journalism, that phrase – “white smoke” – is used to convey the moment when a drawn-out coaching appointment or transfer saga reaches its conclusion. The imagery is borrowed from the Vatican, where ballots are burned to let the world know when a new Pope has been elected. In this case, the smoke might simply be rising from the end of Maurizio Sarri’s latest cigarette.

To say that Chelsea’s new manager is fond of a puff might be understating things. Dries Mertens estimated Sarri’s daily consumption at five packets a day. The manager is almost as keen on his coffee. At Napoli, he would have the club’s shopkeeper bring him a fresh espresso out at set breaks in training every day.

Routines matter to Sarri: in part because he is a superstitious individual. Mertens observed in another interview that Napoli would swap back and forth between specific different training pitches every day, changing the schedule only whenever a winning run came to an end.

More than that, though, Sarri is a man who sees strength in consistency. Napoli have rarely surprised anyone with their tactical approach over the last three years, lining up every week in the same 4-3-3, and yet they have swept opponents aside with a dazzling brand of football.

Arrigo Sacchi, who forged one of the greatest sides in European history at Milan in the late 1980s, has hailed Sarri as a “master” and his team as a “godsend”. They share a footballing philosophy, creating sides that are compact and seek to dominate possession. And they share the fact of never having played the game professionally as well.

From his 20s right through to his 40s, Sarri’s day job was at Banca Monte dei Paschi di Siena, where he specialised in interbank finance. Coaching was something that he did in his spare time, for the love of the game.

Even now, he struggles to frame football as a job. “When I go to lead a training session I never say to my family: ‘I’m going to work,’” he told the newspaper Avvenire. “I come from a family of labourers, and if I hear someone talking about ‘sacrifices’ in football, I get mad.”

The contrast between his background and that of his predecessor at Chelsea is too obvious to ignore. Antonio Conte was a European Cup winner and five-time Serie A champion with Juventus as a player even before he led the Bianconeri to three further domestic titles from the bench. Sarri arrives in west London having never won a major piece of silverware.

What he did do, in Naples, was create a team that challenged for the title on a wage budget barely half the size of Juventus’s. The team he inherited at Napoli had finished fifth under Rafa Benítez in 2014-15. Under Sarri, the Partenopei finished second, then third before last season becoming the first club to fail to win Serie A despite breaking the 90-point barrier.

He did all this despite having the division’s top scorer, Gonzalo Higuaín, signed by Juventus in the summer of 2016, and then seeing the player brought to replace the Argentinian, Arkadiusz Milik, tear his cruciate ligament weeks into the new season. Lacking a true No 9, Sarri reimagined Dries Mertens as a centre-forward. Napoli finished that campaign with 94 Serie A goals.

And yet, for all he is reputed as an attacking coach, the greatest gains achieved in Naples might have been at the other end of the pitch. Napoli had conceded 54 goals in the league during their final season under Benítez. Under Sarri the figure has dipped to 32, 39, then 29. “Balance is the secret for every team,” he insisted in an interview with Il Mattino. “There cannot be a defensive formation and an attacking formation: such a concept is a limitation. The attacking capacity of a team is the fruit of the work of the manager and of the quality of the players.”

As any coach, Sarri has his flaws. He has been accused in Italy of being too rigid: his almost ideological refusal to diverge from set methods – and preferred starting XIs – leading journalists to brand him as a “Taliban trainer”. Critics have suggested that his Napoli team failed to win the title last season because he had failed to rotate against weaker teams, leaving players exhausted by the end of the season.

Others will be more troubled by accusations of homophobia levelled against him by Roberto Mancini – who claimed Sarri called him a “faggot” during a Coppa Italia semi-final in 2016. Or indeed the response the Napoli manager gave to a female journalist, Titti Improta, who asked him about Napoli’s title prospects after a draw against Inter this March. “You’re a woman and you’re sweet,” Sarri said. “For this reason, I won’t tell you to go fuck yourself.”

Sarri was quick to apologise after the latter incident, yet we can say Chelsea’s newest hire is not a man who puts public image over instinct. Before Napoli’s win at Juventus in April, he was caught on camera showing his middle finger to opposition fans from the team bus.

Chelsea can see white smoke at last. The fireworks are still yet to come. - Guardian service

Wexford hurlers win entertaining contest against Laois 23:03
James Durcan steals a draw for Mayo in Ballybofey 22:25
David Clifford sends everyone back to their corners unbeaten 22:09
Agony as Leitrim are denied victory at the death by Derry 19:31
Limerick roar from behind to sink Tipp and start league in style 19:54

1 David Clifford sends everyone back to their corners unbeaten
2 Six Nations: Ireland are contenders but England still the team to beat
3 Mike Catt hopes to have Irish backs purring in Six Nations
4 Welcome to Iten in Kenya – home of champions and cheats
5 Owen Doyle: Creeping professionalism of schools rugby a threat to the game
Real news has value SUBSCRIBE