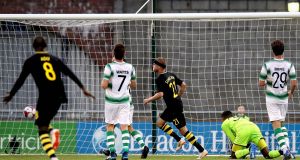 AIK’s Daniel Sundgren scores the first goal of the game during their Europa League first round qualifier against Shamrock Rovers. Photo: Ryan Byrne/Inpho

A late goal from Daniel Sundgren leaves Shamrock Rovers with it all to do in Stockholm next week as they failed to build on a promising start at Tallaght Stadium on Thursday night.

Though they enjoyed good passages of possession throughout, Rovers’ passing lacked the pace and penetration to really trouble their Swedish opponents whose winner, when it came 16 minutes from time, epitomised precisely that.

Rovers started positively, enjoying good early possession, getting in behind the AIK defensive on six minutes, though Dan Carr was offside when his backheel was straight at AIK goalkeeper Oscar Linner.

Watts then struck a crisply hit volley straight into the arms of Linner two minutes later as the visitors seemed content to sit in and see what threat Rovers could muster.

A marauding run down the right flank by full-back Ethan Boyle promised something for Rovers on the half hour but the cross was completely over hit.

With a slow tempo game struggling to come to life, the Swedes came out of their shell as the half wore on, Norwegian international Tarik Elyounoussi having a stinging shot bravely blocked by Lee Grace.

AIK’s Iraqi midfielder Ahmed Yasin raided down the right before cutting in to get a shot away that was deflected into the sidenetting.

Rovers then had a right let off three minutes before the break as the chance of the half was wasted.

Sam Bone was robbed of the ball by Kristoffer Olsson who threaded a pass through the middle for the run of Genok Goitom.

Grace got across, doing enough to put off the AIK skipper who got right under the shot which he blazed over the top.

Though AIK upped the impetus further on the resumption, finally taking the game to their hosts, it was Rovers who might have snatched the lead seven minutes in.

Captain Ronan Finn got in behind on the right, after Joel Coustrain had done well from Boyle’s throw-in, to cross and Watts’ shot was deflected over for a corner.

Watts did hit the target minutes later with a drilled effort that Linner fumbled before gathering.

At the other end, Bazunu was finally called into action on 61 minutes, initially punching away a cross from Olsson before getting down to his left to parry a follow-up shot from Yasin.

The youngster did well again soon after that, one-handedly holding a header by Alexander Milosevic from an Olsson corner before Rovers were undone by a slick passing move on 74 minutes.

Milosevic was involved initially on the right before Goitom and Elyounoussi linked well in turn with crisp passes to find the run of wingback Sundgren who finished confidently righted-footed past Bazunu.

Rovers substitute Aaron Greene had a late chance to level from Finn’s clever flick, but his well-struck low drive was straight at Linner.