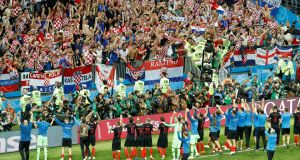 Croatia players salute their fans as they celebrate after their World Cup semi-final win over England in Moscow. Photo: Damir Sagolj/Reuters

An hour after Croatia had knocked out England, I spoke to an English journalist friend who ventured the thought that if England had gone on to win the World Cup, maybe there would have been a strange feeling of hollowness to the euphoria, because the story wouldn’t have made any sense.

Maybe, he suggested, it would ultimately be more meaningful, more satisfying, to win the World Cup as the end point of a carefully constructed plan, for the trophy to have been the logical culmination of a great national effort, as it was for the last two winners, Germany and Spain. An English win in Russia would have been a bolt from the blue that seemed to confirm that football is essentially just a big joke at our expense. Might such a victory have trivialised and cheapened the whole enterprise? Might it have left us with the awkward feeling that we are all wasting our lives following and interpreting meaningless gibberish spewed out by a random outcome generator?

We agreed that when it comes to the World Cup it’s probably better to just win the thing, and then come up with a narrative that makes sense of it all afterwards. Actually there are plenty of ways you could have explained an English victory in hindsight, even if the English Model – fill your league with top international playing and coaching talent by paying the highest wages in the world, then learn football by osmosis – was not one that could easily be exported.

We might instead be left with the task of explaining the triumph of the Croatian Model, which is far more mysterious. Croatia’s success is much easier to admire than to explain. Their courage was epitomised by the magnificent Mario Mandzukic, who hobbled back on after taking Pickford’s studs to his knee to score the late winner. They left you with the impression they simply wanted it more. But the tears of the English players suggest they too had wanted it very badly. How can you measure and compare intangibles like heart and desire?

If there was one tangible difference between the sides, it came down to a familiar English failing: a lack of players who are comfortable in one-on-one situations on the ball. In Luka Modric and Ivan Rakitic, Croatia have players who are confident enough to take the ball and draw opponents to them without feeling a sudden uncontrollable urge to “get rid”, and then calmly move the ball to unmarked team-mates. Over the course of 120 minutes, all those little moments add up to an edge. By contrast, when the English players were pressed they started to hurry and make mistakes, which is why England’s precise vertical game began to disintegrate into an old-fashioned chaos of long balls: fear of losing the ball made them give it away.

A curious aspect of the aftermath was that the Croatians seemed to take a certain malicious delight in overturning England’s bandwagon. “They should be more humble and respect their opponents more,” lectured Modric, while the right-back Sime Vrsajlko remarked that England’s supposed evolution to a more sophisticated game had not been able to withstand Croatia’s pressing game.

Croatia’s gleeful willingness to kick the English when they are down might puzzle some in England: after all, the humility and likeability of Gareth Southgate’s squad was supposed to be their USP. Rather than “Send Us Victorious” on the side of their bus it should have said just “Humble”.

Yet it is evident that all the “easy side of the draw” stuff that was indulged by English media and fans rankled with Croatia, just as it had annoyed the Swedes, who had bristled with “we’ll see you out there” quotes before their quarter-final, but were not good enough to make their point on the pitch.

And remember that the rest of the world has been fascinated these last few weeks by the English meme mania encapsulated in three simple words: “It’s Coming Home”. As Vedran Corluka chortled to English journalists on his way through the mixed zone, “It’s not coming home.” It seemed the Croats didn’t like that either, and judging by some of the gloating reaction around the world, they were not alone.

This seems to cruelly add insult to English injury: don’t they realise that “It’s Coming Home” was only ever just a joke, it was ironic bravado, it was never really meant to be taken seriously, and anyway, aren’t we allowed to get carried away? This is why Roy Keane drew such furious criticism for his comments on ITV after the match. He mocked his fellow pundits, suggesting they had already started thinking about the victory parade, and told them they needed a reality check. “Roy Keane is just awful I am sorry” spluttered Ed Miliband, proving the point that it’s not always obvious when things are said half-in-jest.

From a distance and stripped of context and perhaps passed through linguistic and cultural filters, It’s Coming Home began to lose its sheen of irony, repeated millions and billions of times it began to sound less like a joke and more like an arrogant prediction. And for some of those bellowing it out perhaps that’s what it was: when a joke attains that extreme level of saturation you’re long past the point where everyone understands it the same way.

There are many examples of jokes that develop their own uncontrollable momentum. In 2004 Dave Chappelle did a series of sketches in which Eddie Murphy’s brother Charlie told stories about hanging out with Rick James. The repeated punchline “I’m Rick James, bitch!” became a viral catchphrase and soon after that it became the bane of Chappelle’s life. Drunken frat boys yell it out at his gigs to this day, like people at a Blindboy Boatclub podcast recording screaming “Do Horse Outside!” Chappelle saw that, contrary to his intentions, a lot of people were laughing at his racial comedy for the wrong reasons; he told Esquire magazine he’d realised: “These jokes are dangerous in the wrong hands...”

The creators of South Park, Trey Parker and Matt Stone, have run into a similar sort of problem with the most popular character in that show, Eric Cartman. Cartman is obviously meant to be a bad person, but he’s also the funniest character, and even though the show consistently presents him as an exemplar of everything that is wrong, there’s a disturbingly large cohort of fans who see him as a role model.

So It’s Coming Home started out as a self-deprecating joke, rapidly engulfed the planet while mutating into something less self-deprecating, and ultimately helped to fuel the Croatian fury that knocked England out. In the end the only ones that weren’t laughing were the English. It must seem today that they can’t win no matter what they do, but at least this time they gave it a better-than-average go.