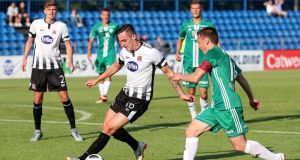 Dylan Connolly scored the game’s only goal at the Kadriorg Stadium to hand Dundalk the initiative in their Europa League first qualifying round tie with Levadia Tallinn, but manager Stephen Kenny feels the tie is still very much alive ahead of Thursday’s return leg in Oriel Park.

The winger scored the game’s only goal on 53 minutes to sink the Estonians but Kenny feels there is still work to be done if they’re to set up a clash with AEK Larnaca in the next round.

“We’re sort of kicking ourselves a little that we didn’t make it a bit easier for ourselves,” said Kenny.

“At 2-0 we’d be very confident but with just the one goal it’s still a test. It won’t be any easier next week just because we’re at home. I think it will be a tough game.

“It’s not often you get an away victory in Europe. It was an important win but it’s only half time. There’s still a big job to do still. The tie is still in the balance.”

Given Cork City won 2-0 at this venue 12 months ago before advancing 6-2 on aggregate, many expected Dundalk to blitz the Estonians.

This is a much-changed side from then, however, with only goalkeeper Sergei Lepmets, winger Marcellin Gando and centre half pairing Igor Dudarev and Maksim Podholjuzin surviving from last year’s starting lineup. In between Levadia merged with 2016 Meistriliiga winners FC Infonet Tallinn with former Serbian and Ghana assistant Aleksandar Rogic coming in as head coach.

That change was noticeable for much of the opening period as the home side took the game to the SSE Airtricity League Premier Division leaders, who spent a lot of the first half on the back foot.

For all their pressure, Levadia lacked a cutting edge in front of goal with Rasmus Peetson pulling a shot wide and Yurij Tkachuk firing a free tamely at Gary Rogers.

While their openings were fewer, Dundalk undoubtedly had the better chances. Michael Duffy had a shot just wide on 16 minutes while a minute before the break it took a desperate lunge from Podholjuzin to deflect Robbie Benson’s shot over the crossbar after he had been picked out 10 yards out by Duffy’s pull back.

The opener did arrive eight minutes into the second half as Jamie McGrath released Duffy on the left with his cross turned in at the back post by the inrushing Connolly.

It took a superb save from Rogers to preserve that lead on 59 minutes when he did superbly well to get down at his near post to keep out Pavel Marin’s cross after it had deflected off Brian Gartland.

Dundalk had two late chances to kill the game off with Connolly being denied by Lepmets after being played through by Chris Shields on 72 minutes. The keeper also kept out a Pat Hoban effort five minutes from time after he was teed up by Connolly 10 yards out.