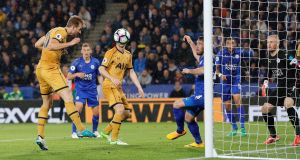 A team does not need a title to show its class. Tottenham Hotspur demonstrated their excellence at the King Power by swatting aside last season’s champions with regal aplomb. Harry Kane struck four goals and Son Heung-min scored twice as Mauricio Pochettino’s men showed determination to finish their campaign on a high even if Chelsea are out of their reach. The Premier League’s top scorer crown is now within Kane’s grasp.

This match was about maintaining standards. There were no longer any trophies at stake nor relegation traps to dodge but both managers stressed before kick-off that they wanted their players to perform as if their futures depended on this game.

That might not even have been too much of exaggeration in some cases, although the person with the most riding on the game may have been Craig Shakespeare, whose prospects of being kept on as Leicester manager for next season could be enhanced if he finished the campaign on a triumphant note and guided the team into the top half of the table. That would amount to a display of strong and steady leadership by the 53-year-old bearing in mind the chaos that Leicester were in when Claudio Ranieri was voted out of office in February.

Injuries ravaged both line-ups so both benches featured youngsters without senior appearances. As for the starters, Moussa Sissoko played at right wing back for Spurs while Christian Fuchs partnered Yohan Benalouane in the middle of Leicester’s defence in the absence of Robert Huth and Wes Morgan. Benalouane, in particular, was made to look ditzy by Spurs’ artful attackers.

But it was Leicester who made the better start in a crackling atmosphere. Both sets of fans sang songs to show that they considered this not to be a meaningless encounter but a pointed renewal of old rivalries, with the home supporters deriving much glee from reminding the visitors of the outcome of last season’s title race.

In the ninth minute Riyad Mahrez and Jamie Vardy put together a move that could have been pulled from a DVD of that campaign, the Algerian weaving his way infield from the right before slipping a ball through to Vardy. The striker shot on the run from 18 yards but Hugo Lloris made a staunch save. Four minutes later the Frenchman was called into action again, this time blocking a deflected shot by Daniel Amartey.

Then Spurs bared their teeth and a nightmare began for Benalouane, in particular. Son should have scored when the ball ricocheted to him after Dele Alli charged down an attempted clearance by the Algerian, but Son blasted over from the edge of the area.

Sissoko had a more respectable effort moments later, lashing a shot just over the bar from 20 yards after Kane’s weak free-kick rebounded off the wall. Kane flexed his muscle in the 20th minute, when he added to Benalouane’s difficulties by shunting the defender off the ball near the corner of Leicester’s box. But the striker could not complete the ambush, letting Leicester off by curling his shot over the bar.

There was no pardon for the home side in the 25th minute. Toby Alderweireld exposed flat-footedness in their defence by dropping a long pass over them from deep inside his own half, Fuchs failing to cut it out and Benalouane undermining his team’s offside scheme. Son took advantage, scampering on to the ball before playing a square pass to Kane, who converted from close range.

Spurs players began to run amok. They increased their lead in the 35th minute with a sumptuous goal, an intricate move culminating with Alli scooping the ball over the heads of Leicester’s bewildered defenders before Son swept a volley into the net from 10 yards.

Spurs had torn open a huge class divide between the sides. Shakespeare had to find a way to stop the bleeding, at least. He introduced Islam Slimani for Shinji Okazaki at half-time and Leicester made a strong start to the second period. In the 59th minute their revolt gathered momentum when Ben Chilwell scored with impressive composure. Lloris had rushed out of his box to intercept a pass to Vardy but Leicester kept possession and when the ball was played to Chilwell, the 20-year-old sidestepped a defender and stroked it into the net from 12 yards despite Dier’s attempt to clear off the line.

Belief in a comeback lasted four minutes. That is how long it took Spurs to re-establish their superiority. Alderweireld cantered down the right and floated a cross from the right to the back post, where Victor Wanyama headed it back across to Kane, who nodded in from two years. Eight minutes later Son struck again, ridiculing Wilfrid Ndidi at the edge of the box before sweeping a low shot into the net. The uprising had been quashed with imperious style.

Kane completed his hat-trick two minutes from time, rifling a low shot into the net from 20 yards and then added his fourth.