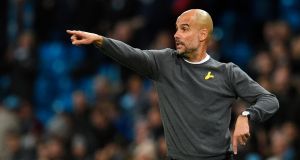 Pep Guardiola has said Manchester City will not be guilty of the complacency that led to Manchester United’s defeat at Huddersfield Town this season.

The Premier League leaders play at the John Smith’s Stadium on Sunday. José Mourinho’s side lost there 2-1 on October 21st and the United manager said his players’ attitude was to blame.

Guardiola shrugged off any notion City could suffer the same fate.

“The warning is to say: ‘Be careful,’” he said, before pointing to last season’s FA Cup goalless draw at Huddersfield. “We know exactly what happens, we were there, and sometimes you have to accept the opponent is better.

“Huddersfield will be complicated. There will be a big atmosphere but it’s the same as Brighton [where City won 2-0]; people said it’s not easy but it’s normal that it’s difficult. But complacency will not happen.”

Guardiola is pleased with how Ederson has begun his City career. The goalkeeper was signed from Benfica in the summer as Claudio Bravo’s replacement.

“When you buy a player from another country you look at how they will react, regarding their families, kids, school,” the manager said. “It’s a process but the process has been good, he has settled so well. He’s so calm, always the same behaviour in good and bad moments and he gives us confidence.”

Phil Foden made his debut in Tuesday’s 1-0 Champions League win over Feyenoord, coming on for the last 15 minutes.

Asked how much more playing time may be given to the 17-year-old midfielder, Guardiola said: “We are so pleased he played. It is so important for the club to have one, two or three local players from the academy. His family are City fans and that’s so important. So we’ll take the decision about him playing more – it depends on his quality and his development.”

Raheem Sterling scored the winner against Feyenoord. It was his 11th goal of the season, equalling his best return, and Guardiola was surprised at the tally.

“It’s good,” he said. “Sergio Agüero didn’t play all the games, Gabriel Jesus too. Normally both are better scorers. It’s good the players know he can score goals. It’s the best number of his career and we’re in November and there’s a lot of time to score more.

“He has to focus and try to play better and the goals will come. At the end of the season we’ll celebrate it and then next season he’ll have another number to break, another target.

“We have a lot of different players who can score – you can’t win the title with just one or two scoring goals. Kevin De Bruyne, Nico Otamendi – it is so important.”

Vincent Kompany was not in the squad for the Feyenoord match but is fit to face Huddersfield.

Wagner knows doing the Manchester double is a big ask.

“I think the circumstance does not look that realistic,” he said. “But sometimes the impossible happens. I think everybody knows Man City at the minute are the best team in the Premier League. We know every individual has a personal borderline and we have to change our borderline on Sunday to be successful.

“The good thing is that everybody is aware how exciting this moment will be. It feels more like Champions League for us rather than Premier League. ”