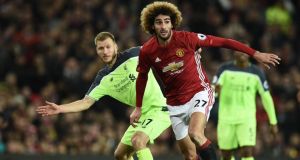 Manchester United’s Marouane Fellaini is suing sportswear giant New Balance for around £2 million over “defective boots” that he says had a negative impact on his performances. Photo: Oli Scarff/Getty Images

Manchester United midfielder Marouane Fellaini is prepared for a high court battle against sportswear giant New Balance over his old football boots, claiming they were so poorly constructed the logo peeled off.

Fellaini is suing American brand New Balance for £2m in damages after it terminated his contract prematurely. The 30-year-old alleged the bespoke boots they supplied him with were “defective” and hurt his feet, according to documents submitted to the high court. The Belgian said they had to be “steamed and stretched” by a United kit man before they would fit.

A bitter breakdown in relations between Fellaini and New Balance serves to emphasise the increasingly commercial world of elite sport where what could be viewed as an easily resolved problem has resulted in legal proceedings.

Before football became a multibillion-pound business every player on the pitch wore identikit black boots but a kaleidoscope of different colours, brands and styles are now available with sponsorship deals often worth seven figures. Wayne Rooney receives £1.2m a season from Nike for wearing their boots while Real Madrid striker Cristiano Ronaldo signed a lifetime deal with Nike last year worth £800m.

Fellaini’s claim is that New Balance terminated the boot contract unlawfully part way through the season. But New Balance counters it was entitled to do so because he played without their logos on his boots. In his defence, Fellaini stated that the quality of the boots was so poor that the logos peeled off.

There is no date set for the high court hearing but if a judge is required to rule on the case they may have to examine a string of often badly constructed late-night WhatsApp messages between Fellaini and New Balance staff.

But Ian Mill QC, who represents New Balance, said the sportswear firm had solved the problem. “The player orally informed Mr Simon Crawford of New Balance that he was experiencing discomfort when wearing certain boots,” said Mr Mill, “New Balance therefore arranged for the player to be provided with bespoke replacement boots.”

Lawyers for Rosalina said in August 2016 Fellaini had asked for boots which were wider and longer. A month later he had sent a message which read: “a big problem no comfy at all.”

Later that morning he had added: “I have to see the pedicure this morning.”

Lawyers for Rosalina said in September a member of New Balance staff had replied: “We can fix it my friend ... we have the big dogs working on this.”

Mr Mill said in January Mr Robson had asked: “Is the fit feel of the boots good?” – and Fellaini had replied: “Perfect for the boots.”

There are echoes of a similar fallout in 1998 between England player Steve McManaman and Umbro, albeit in an era when sponsorship deals were significantly less lucrative. McManaman signed a contract with Umbro when he was 18 for £6,000 a year and claimed it had not increased sufficiently as he became a more established player, suggesting it was effectively a restraint of trade. He began wearing Reebok boots with the logo removed before Umbro eventually released him from his contract. But before that he was forced to apologise for breaking a high court compromise ruling not to wear any other boots but Umbro.

Problems with sportswear partners are not the sole preserve of footballers. At Wimbledon in 2012 Adidas scrambled to find a solution after Andy Murray complained about the depth of the pockets in his shorts. Spare balls spilled out of them and onto the court during a third-round match against Marcos Baghdatis. Murray said at the time he had been cost a couple of crucial points. He was midway through a five-year contract worth £15m and did not threaten legal action, instead wearing a different style of shorts for the remainder of the tournament. – Guardian service