Liverpool’s symmetrical full-backs have turned them into world leaders

For all the protests from Guardiola, this match was not settled by marginal refereeing decisions 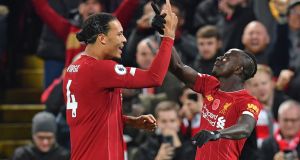 It is the hardest thing in any sport to make astonishingly difficult things look astonishingly simple. With 13 minutes gone at Anfield Liverpool produced a piece of play that seemed to stop the day, a perfect little miniature of bold, simple lines, carved across the pitch, like a Miro line drawing.

It took six seconds, four touches and three diagonal movements for the ball to travel from right-back to left wing, back to inside-right, then back again into the left-hand corner of the net. The moment of ignition came from Trent Alexander-Arnold, who looked up and played one of those lofted cross-kicks, full-back to full-back.

Andrew Robertson took one touch and hared into the space ahead of him. His pass back across into Mo Salah’s path had a gorgeous symmetry, 45 degrees back the other way and perfectly weighted, making Fernandinho hop and lunge, erased from the game by the precision of the delivery. Salah had time to measure his stride before nodding the ball back across Bravo in perfect symmetry with the angle of that first pass.

How far do we really want to go with this? Liverpool did not win this game because of marginal refereeing decisions. This is simply wishful thinking, subjectivity bending the lines and frying the brain. For all his misdirection, his insistence during the game that Manchester City had been wronged, robbed, betrayed by the gods of the video screen, Pep Guardiola will know this better than anyone else.

Perhaps he might also dwell on the way Liverpool’s decisive strengths here, the key actors in that Miro ball goal, mirrored his own team’s weaknesses. What kind of Pep-coached champion team comes to Anfield to play a game like this with a raggedy back-up goalkeeper, a makeshift centre-half, the remains of John Stones and a tyro left-back?

City have signed one centre-half in the past two and half years. In that time one has retired. Another has gone. Nicolas Otamendi has fallen through the floor. Buying from a position of strength is always an optimistic tactic. Buying in a position of weakness when you aim to be the best club side in the world, well, that’s just common sense.

And yet Guardiola hasn’t bought, he has shown a kind of disdain for a position, a role an idea that simply doesn’t fire his imagination. It is a failure of management, albeit one that comes from the same place that as his strengths, the same will that allows him to build a team who play with such beauty when they have the ball.

Jürgen Klopp’s achievement to produce a team capable of exposing this weakness here, and doing so with a performance that owed much to another bravura display from the attacking parts of its own defence. Guardiola has been credited with revolutionising the role of the full-back. You wouldn’t have guessed it here as his team were cleaved apart for that crucial second goal by Liverpool’s own variations on the full-back as left- and right-sided playmakers.

Alexander-Arnold was, once again, sublime here. His range of passing from right-back is a thing of beauty. His calmness, his physical strength, his ability to cover the ground allow him to dominate his flank. He sees the whole picture from inside his own half.

One to pass and one to run: Robertson was an urgent, thrusting menace on the other flank, a £7 million (€8.1 million) player coached into phenomenon at this level. Robertson and Alexander-Arnold played 21 long passes in this game, compared to seven by Kyle Walker and Angelino. Virgil van Dijk was, as ever, a wall. But either side of him it was Liverpool’s full-backs who dictated the rhythms of this victory.

It should come as no great surprise. This is a team playing through a kind of golden haze right now. For Liverpool everything is illuminated. Fabinho and Gigi Wijnaldum made 40 passes between them in the first half. Only one went astray. For a while as City pushed back at them Sadio Mané came and played in front of Robertson as an auxiliary block on the left. He robbed Bernardo Silva and romped away with the ball. He turned away from Kyle Walker in a tiny sliver of space and dinked a lovely pass up the line to Wijnaldum. His goal in the second half, Liverpool’s third, was just a garland to a performance of real authority.

There will of course be a temptation to call it now, to say Liverpool won the title here, that this is an impregnable lead. It should be resisted simply out of respect to the remaining six months of the season. But Liverpool did establish one thing beyond any doubt here. Right now, in this snapshot in time, this is the best football team in the world. Best of all, and led from the flanks by those brilliant full-backs, they continue to make it look breathtakingly simple.