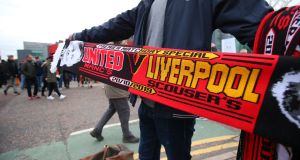 The survey, conducted by Empathy Research for forthcoming book An Atlas of Irish Sport, found that 33 per cent said they follow United, with 29 per cent describing themselves as fans of Liverpool. Photograph: Alex Livesey/Getty Images

Liverpool may be racing towards their first English league title in 30 years, but it is Manchester United, the club that has dominated much of the Premier League era, that remains the best-supported football team in the Republic of Ireland, according to research carried out for a forthcoming book. Between them, the research suggests, the two clubs have over a million supporters in this country.

For the survey, conducted by Empathy Research for An Atlas of Irish Sport, to be published by Cork University Press in the coming months, 1,033 people were interviewed.

Forty-six per cent said they supported a team and, of those, 33 per cent say they follow Manchester United, with 29 per cent describing themselves as fans of Liverpool. The figures suggest that the two clubs have 535,500 and 464,100 adult supporters respectively in the 26 counties. Those numbers do not, however, include minors.

It is quite a way back to Celtic in third place, on 14 per cent, and Arsenal on 10 per cent. Two Airtricity clubs feature in the top 10, with Cork City in sixth position on 7 per cent of those who described themselves as a supporter, and Dundalk, who are tied with Manchester City and Tottenham Hotspur for eighth position, on four per cent. Shamrock Rovers come in next along with Leeds United.

The survey, which was conducted at locations around the country just before Christmas, reveals the remarkably dominant positions held by United and Liverpool in the affections of supporters in this country.

The various Irish clubs that make the list do so off the back of strong showings among the population in what might be regarded as their catchment areas, with 10 per cent of those surveyed in Munster describing themselves as fans of Cork City, a figure that puts the club level with Liverpool in the region but still some way behind Manchester United. Similarly, Dundalk are mentioned by 5 per cent of respondents across Leinster (excluding Dublin) and Shamrock Rovers by 5 per cent in the capital.

None of the leading Irish clubs appear to attract any significant support outside of its own region, however, whereas the big English outfits consistently top the table with double-digit levels of backing within the population of Dublin and every province. Only in Leinster do Liverpool eclipse their rivals in the survey.

There are, however, significant variations in levels of support when it comes to different age categories, with Liverpool clearly enjoying a resurgence among younger fans. All of the respondents were over 18 but, within the youngest grouping, those aged between 18 and 24, Liverpool come out on top with 17 per cent of those questioned compared to 13 per cent for United. That represents a huge shift from those aged 25 to 34, a category in which United dominate their rivals by 21 per cent to just 8 per cent, numbers that underline the part success plays in attracting new fans.

Unsurprisingly, perhaps, more men than women say they have a favourite team, although a fifth of those females questioned still said they supported one of the two big English outfits. Critically, though, just 1 per cent said a football team’s results made enough of an impression on them to significantly affect their moods. The corresponding figure for men was 8 per cent – although, statistically speaking, virtually nobody over 55 from either gender said they cared quite that much.