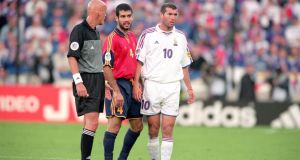 I’m not going to tell you what he told me,” Zinedine Zidane said smiling broadly, a glint in his eye, “but it was very, very interesting.” Whatever it was, it worked. In March 2015, when the Real Madrid manager was still doing his Uefa B licence and coaching Castilla, the club’s second team, he travelled to Munich with a small group of former players finding their way in management, among them his former France teammates Claude Makélélé, Willy Sagnol and former Liverpool winger Bernard Diomède. There, they spent two days with Pep Guardiola.

Guardiola “inspired” them, Zidane said on Tuesday. “I was able to go and learn from him. He was very honest with us. He told me lots of things, gave me advice, we talked a lot, although we all do things differently.”

There is personal affection in Zidane’s repeated public insistence that City’s manager is the best, but he believes it too. Given his past, the damage he has done at the Bernabéu, where he has lost just one of eight visits as a manager, and the threat he poses now, it might be political to gloss over Guardiola but Zidane won’t. “He has always proven [to be the best]: first at Barcelona, then Munich, now in Manchester,” he said.

Now he must do so again, not least because this could be the last chance for three years. Unable to win this competition since 2011, those Champions League exits create doubts Guardiola may not deserve – although he considered Bayern Munich’s defeat to Madrid in 2014 his greatest mistake. Zidane must too, facing his friend for the first time in a competitive game. Oddly, it feels like doubts around him never go away entirely. These are difficult days for both managers that may go a long way to defining their seasons.

“The hour of truth,” Sergio Ramos called it, a “time for real men, to put a fist on the desk”. There is, Madrid’s captain said, “no time for laments”. Yet obligation is also “opportunity”, he insisted. “A spotlight in which you show what you can do.” Madrid have dropped five points in their last two league games, drawing at home against Celta and then beaten 1-0 by Levante, seeing Barcelona go back above them, two points clear at the top. A fortnight before, they were knocked out of the Copa del Rey by Real Sociedad, conceding four at home. City come on Wednesday night; Barcelona on Sunday. Losing both doesn’t bear thinking about, but it is inevitable that some do. Suddenly, the assuredness and solidity that seemed to characterise Madrid has slipped, at the worst possible time.

Goals are elusive: Ramos, a defender and their penalty taker, is second top scorer. Over the last two months, Karim Benzema has scored just twice, as has Lucas Vázquez. No one else has more than one in that time. Eden Hazard limped off during Saturday’s defeat at Levante.

Nor is this an entirely new problem: looking towards Turin, many see an explanation. When Cristiano Ronaldo left, Madrid had scored 42 more goals than Barcelona; now Barcelona, on 6,151 in their history, are one ahead. Forty two is the number Ronaldo has scored in Italy. Almost a quarter of Madrid’s games have ended without them scoring since he joined Juventus. When he was there, that figure was eight per cent.

The last time Madrid were in a situation like this, they didn’t win any of the games either. It has not been lost on anyone that a year ago Madrid lost three times in eight days at the Bernabéu, effectively ending their season: eliminated from the cup by Barcelona and the Champions League by Ajax, a defeat in the clásico ended any hope of competing for the league either. It also ushered in Zidane’s return. And that is part of the point.

Exaggeration pervades responses to Saturday’s defeat, secured by a brilliant goal out of nowhere. Headlines have talked of a “nervous breakdown”, even “crisis”, a “psychosis” after last season. But this run is both short and, at the risk of oversimplifying, easily explained: there have been rotations and the return of Ferland Mendy alone changes everything defensively.

There is something about the Champions League that is different too, and always has been here, Ramos describing it as “magical”. And the pressure is embraced here, focusing minds and increasing effort.

“The margin of error is minimal, but that’s what makes us different,” Ramos said. Then there’s something else: last year when it all fell apart Zidane was not here. He might not have got to here this season either. His return always seemed like a risk, the chance to lose a legacy, and nor did the club fulfil the promises they made in trying to get him back. When they went to Istanbul to face Galatasaray in the group stage, the Frenchman was on the verge of the sack.

But there is something about Zidane, his relationship with the squad, a shared mission, and they went on a 15-game unbeaten run. He had, it seemed, done it again. Until last Saturday, when the alarms sounded again.

Yet now that he has got here, there may be no one better to take charge. Not in Europe at least. This is a place he has never, ever fallen. Instead, he has achieved what no one else ever has, and what he never imagined. “Guardiola wasn’t fast on the pitch,” Zidane told BT Sport, tapping his head, “but he was here, and he has that as a manager”.

Zidane, of course, was everything on the pitch. “It was an honour for us to have him there,” Guardiola said. “We spoke and it was very, very good. He had just started as a coach, but as a player he was one of the greatest of all time and so it was a pleasure to receive him. You never know how it will go but we all have dreams and it’s great that someone who has been what he was as a player and who represents our profession so well has been successful.”

There was no guarantee. When the Frenchman went to see him, seeking to listen and learn, he didn’t know if he would make a manager. It is no vocation, he admits, and he is different to other coaches. But he turned out to be good at this, to have a feel for it. “What Zidane has done won’t happen again, or it’s very hard for that to happen again,” Guardiola insisted.

It is known, sure, but laid out in black and white, it remains astonishing: as coach, Zidane has never lost a Champions League knockout tie. He has never not won the competition. He was even a European Cup winner in his sole season as assistant to Carlo Ancelotti. A year on, he went to Munich and it began. Three times Zidane has been here, three times he lifted that trophy – once more than the best manager in the world, whose advice he sought at the start. - Guardian