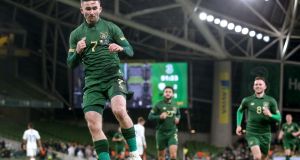 Cork City have agreed a deal with Preston North End to cancel sell-on clauses for Ireland internationals Seán Maguire and Alan Browne in return for a figure in the region of €500,000. Photograph: Tommy Dickson/Inpho

Cork City have confirmed that they struck a deal with Preston North End in which they agreed to the cancellation of the sell-on clauses that were included in the transfer deals for Ireland internationals Alan Browne and Seán Maguire in return, it is believed, for a figure in the region of €500,000.

With the allocation of licences to play in the league being awarded this week, the club had been under pressure to settle an outstanding debt to the Revenue and it appears to have been forced into the deal with Preston in order to raise the cash required.

Officials from the English Championship club were in Cork this week and it had been widely believed that there was the possibility of Preston taking a stake in City or coming to some other long-term arrangement.

This has been played down by the Irish club, although the relationship between the two is likely to have been helped by this week’s dealings, with reports that Preston are on course to sign Under-16 Ireland international Harry Nevin in the summer window.

That will be the last window, as things stand, in which Ireland players who have yet to turn 18 can move to England.

City were busy on Thursday concluding business with other English sides for players to move in the other direction with centre back Joseph Olowu arriving from Arsenal and 21-year-old winger Deshane Dalling joining from QPR. The club face Shelbourne at Turner’s Cross in their opening game of the new season on Friday evening.

In a statement on Thursday regarding the Preston deal, the Cork City board said that the tax liability had previously been included in the amount members had been told was owed generally at their last briefing.

“This liability was incurred during the normal course of business and was reported as part of the overall debt figure at the last Foras General Meeting,” it said.

“The board also wish to confirm that CCFC have not entered into a formal partnership with Preston North End, and any further decisions will be voted upon by the membership. That being said, we would like to thank Preston North End and their associates for their endeavours to get this transfer deal over the line over the past number of days.

“The board will continue to work in the best interests of Cork City Football Club and its members, which includes the exploration of any/all potential funding opportunities for the football club, which are ongoing. The board will make another announcement over the coming days as it pertains to the club’s current position, and the AGM.

“Most importantly, we are all here to support Cork City Football Club, and our main focus should now turn to supporting our manager, Neale Fenn, and his young and hungry squad as they take on Shelbourne tomorrow night.”

The League, meanwhile, confirmed on Thursday that the First Division campaign will kick off next week with 10 teams, including Shamrock Rovers II but not Limerick, participating.