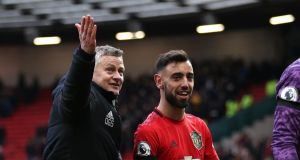 The net debt increase is published in United’s Q2 financial results that also document how broadcast revenue for the quarter showed a decrease of £39m (€45.4m) – 37.6 per cent – due primarily to not competing in the Champions League this season. Total revenues were also down, by 19.3 per cent to £168.4m (€196m).

Regarding the net debt increase it is understood this was primarily because of investment in players and that the club view the figure as manageable and that the gross debt remains the same. The results are for the three months to December 13st 2019, since when United have bought Bruno Fernandes for an initial £46.5m (€54m).

The backing for Solskjær came from Ed Woodward and suggests the club intend to retain the manager for next season unless there is a serious downturn in results.

“We are pushing for a strong finish in the Premier League, the Europa League and the FA Cup as we enter the final third of the season,” the executive vice-chairman said. “We have continued to make progress on our squad rebuild, with many changes in terms of players that we have brought in and players that have come through our academy.

“The foundation for delivering the long-term success that we are all working towards is in place as we implement our plan and our footballing vision with Ole.”

United are in fifth place, which is expected to secure Champions League football for next season unless Manchester City have their two-year Uefa ban overturned. - Guardian