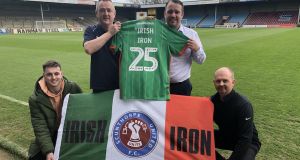 Bernard Griffin, second from the left, with Scunthorpe’s ’Irish Iron’ away kit at Glanford Park.

In case you haven’t been paying complete attention, League Two side Scunthorpe United have been playing their away games this season in a green strip with orange trim and white shorts in order to help celebrate the 25th anniversary of Irish Iron, the fan club run by Ballybofey-based Bernard Griffin.

There are 100-plus members, 30 of them based in Ireland, half of whom get over to at least one game year.

“It was only after my son (Ben, also now a supporter) was born 22 years ago that I found other fans here,” says Bernard.

“I was onto the club within 15 minutes of his birth to register him as a member and somebody told the local paper. Des Cahill picked up on the story. Afterwards RTÉ were back on to say a couple of other Scunthorpe supporters had been on, wanting to get in touch.

“But the fan club had been going three years by that point?” The Irish Times asks, a little puzzled. “Yeah,” says Bernard, “it was really only me until then.”

It was 3am a couple of weeks back when the bedside alarm in Sharon Smith’s Co Cavan home went off. An hour later she was on the road to Dublin Airport for what would be a day trip dogged by public transport and storm-related flight delays.

“At least I saw QPR come from behind to win and Ryan Manning play really well,” she says cheerily.

Born in west London to parents from Cavan and Athy, Smith used to walk to games at Loftus Road but thought she might have seen her last one at the ground when she moved to Ireland in 1999. Then, thanks to a chance offer of a ticket for an away game at Everton “I rediscovered my obsession”.

Since 2012/13 she has been a season ticket holder again and makes it over to “most home games”, sometimes staying over with a cousin, sometimes taking a late evening flight back. “Thankfully, they’re not all 23 hours epics but then they don’t score four too often either,” she says with a laugh.

The 46-year-old was born in Grimsby to a local father and Irish mother and, though the family moved to Wicklow while he was still an infant, he can only ever remember supporting “Town” he says.

“It helped that the star player at the time was Joe Waters from Limerick,” Anderson recalls.

“He’s an icon in Grimsby. When I was at school there were loads of Arsenal and Liverpool fans but I was always pretending to be Joe in the yard.”

It’s a tricky place to get to and so a significant number of games he gets to are away ones. He travels over with family or Nick, a fellow fan he bumped into after wearing a club shirt to a five-a-side game. The family – wife Louise and kids, Sean, Jamie and Elizabeth – went over at Halloween, taking the ferry then doing the four-hour drive to Cleethorpes [where Grimsby actually play].

“But it rained all the way,” says Anderson, “and the game [against Cheltenham] was postponed.”