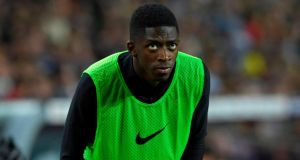 Ousmane Dembele has been given the all-clear by Barcelona’s medical services. Photograph: AFP/Getty Images

Barcelona’s record signing Ousmane Dembele has been given the green light to return to action after almost four months on the sidelines.

Dembele, who cost Barca an initial €105 million when he joined from Borussia Dortmund last August, managed just three appearances for the Catalan giants before suffering a hamstring injury against Getafe on September 16th.

The France international subsequently underwent surgery in Finland and has been working his way back to fitness since. He has now been given the all-clear by Barca’s medical services, though, with a club statement saying: “After a lengthy recovery process from an injury to the femoral biceps on his left thigh, the 20-year-old Frenchman is now available for Ernesto Valverde.”

Barca are next in action against Celta Vigo in the Copa del Rey on Thursday before taking on Levante in La Liga on Sunday, where they will attempt to consolidate their nine-point lead at the top of the table.

Dembele became the second most expensive player in history when Barca invested almost half the €220 million they received from Neymar’s move to Paris St Germain earlier in the summer on the young Frenchman.