Everton ‘in a very good position’ despite away defeats, says Allardyce 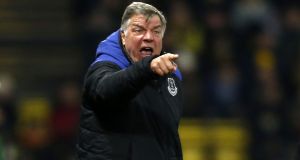 Sam Allardyce: “The expectation is the same as Newcastle and the same as West Ham, but Everton have won a lot more in past years.” Photograph: Ian Kington/AFP/Getty Images

Sam Allardyce has claimed Everton are “in a very good position” and that doubt over his future has therefore come as a surprise, despite winning twice in 11 games and suffering five consecutive away defeats before Saturday’s visit to Burnley.

The Everton manager is facing growing criticism over results, performances and public pronouncements that have alienated many supporters, the latest being that expectations at Goodison Park are no different than at Newcastle United or West Ham, two of his previous clubs.

Allardyce signed an 18-month contract to succeed Ronald Koeman in November but may struggle to survive the summer on current form. The former England manager, however, believes Everton’s problems are deep-rooted and that the possibility of drawing level on points with Burnley with victory at Turf Moor is evidence of improvement. Everton were five points above the relegation zone after David Unsworth’s final game as caretaker and are now seven points clear.

“I am here as long as I win football matches,” said Allardyce. “If you don’t win football matches it doesn’t matter how long your contract is – you lose your job. If you win matches you keep your job and can plan the future. At the moment, we are in a very good position. I am slightly surprised about the speculation.

“The differences between us are we are not good enough away from home, but good enough at home. From where we started, down in the bottom end and everyone talking about relegation, to where we are now [is an improvement]. Burnley are having a magnificent season and if we beat them we are level with them on points on Saturday. That is the realistic view and all the other speculation will go on.

“The away form is a long-standing problem at the club. It hasn’t only arrived with my tender. It was under Ronald and Roberto [Martínez] before I got here. It is not something I want. I have to remedy it. In 2017 there were only two games won away from home.”

Allardyce claimed he had improved Everton’s away form before last Saturday’s trip to Watford, but a fifth consecutive defeat equalled the club’s worst run on the road for three years. The team’s style of play, with chances and shots on goal again limited, also rekindled a criticism that Allardyce insists is out of date.

“Style of play is only brought up by people making out we played a certain type of football, but that was more than 10 years ago,” he said. “Style of football for me is about a team going on the pitch and playing to its best to win a game of football. Style of play has never really been an issue apart from the legacy which was laid against my name. Style of play is about going out and performing better than the opposition and getting a win.”

Everton’s manager risked further aggravating supporters – and possibly Farhad Moshiri, the major shareholder who has invested almost £250 million with the aim of challenging for Champions League football – with his assertion that the pressure is no greater than at Newcastle or West Ham.

Allardyce confirmed the January loan signing Eliaquim Mangala will miss the rest of the season with damaged knee ligaments and will spend his rehabilitation with Everton at the request of parent club Manchester City.