Mourinho: Ibrahimovic will leave Man United at end of season 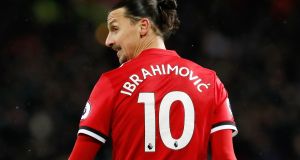 Jose Mourinho has said he expects Zlatan Ibrahimovic to leave Manchester United at the end of the season. Photo: Martin Rickett/PA Wire

José Mourinho has indicated for the first time that Zlatan Ibrahimovic is set to leave Manchester United at the end of the season.

The Swede is not match fit following a setback in his return from the serious knee injury suffered against Anderlecht in April. Ibrahimovic, who scored 28 times last season, did make a comeback, featuring in seven games between late-November and Boxing Day, when he was taken off at half-time against Burnley.

“Zlatan – we all think it’s his last season at Manchester United and will be a very personal decision for him to play or to stop,” Mourinho said of the 36-year-old.

“He has earned the right of choosing his life, his future – he is such an amazing player and had such an amazing career that only that awful injury in the wrong moment broke a fantastic couple of seasons he could and should have with us.

“This season is really difficult for him – he’s not injured. Does he feel totally happy, ready and convinced that he’s in condition to help the team in this moment? No. But he’s such an honest guy and such a champion he only wants to be back with that feeling of: ‘I’m totally ready for it.’

“So he’s working hard and hopefully his evolution brings him to that level – he wants to have a positive answer.”

The future of Marouane Fellaini, who is out of contract, in the summer remains in doubt. “Fellaini is a different story. He’s still a young player [29], for his knee injury he had a little surgery but minor. He will be back to play again in a couple of weeks so if we proceed in the Champions League after Sevilla, he will be ready for a hypothetical quarter-final [in early April], a hypothetical FA Cup semi-final, for the last couple of months of our Premier League fight.

Mourinho said he was not aware whether the England manager, Gareth Southgate, was meeting Scott McTominay on Friday with regard to the midfielder’s international future. The 21-year-old is also wanted by Scotland.

“I don’t know if that is true,” the Portuguese said. “I can’t confirm because I have no information about that and my advice to him is not about national teams. My advice is to keep the way he is: very humble, very open to learn, intelligent. And keep going in the same direction – trying to fight to have minutes with Manchester United, which is not easy.

“Then national team will be just a consequence of his work at the club but I can’t confirm at all that both national teams have contacted him.”