Manchester United striker's goal against Chelsea was his 22nd this season 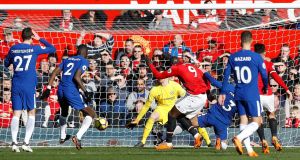 Romelu Lukaku believes he deserves more respect, with the Manchester United striker pointing to his consistent goalscoring record throughout his career.

Lukaku struck for the first time against a top-six side for United in Sunday’s 2-1 win over Chelsea at Old Trafford. The Belgian also created Jesse Lingard’s winner, crossing for the substitute’s 75th-minute header.

Lukaku has scored 27 times in 43 appearances for club and country this season. Sunday’s goal was his 22nd in 40 games for United, though only 13 of those goals have been in the Premier League, which is a tally 11 behind Tottenham’s Harry Kane, 10 behind Liverpool’s Mo Salah and eight behind Manchester City’s Sergio Agüero.

Lukaku is 24-years-old,yet believes his age is almost irrelevant “because I’ve been in the game for so long”. He said: “I started playing when I was 16. Year in, year out people expect 20 goals from me. I’ve been doing it for 10 years straight so I think I’ve proved myself. You expect a bit more respect but it’s the situation we’re in. I don’t listen to it. I just want to improve and show the people what I can do on the pitch.”

Asked how he might receive more respect, Lukaku said: “If I win. I want to win [trophies]. As long as I win and lead my team to winning that’s when I will be really satisfied. As a football player, I don’t play for the individual. A lot of big players that we recognise today in the game are players who have won something and I want to be [the same]. The road is still far ahead but I’m ambitious and I’ll work every day for my team to win – I’m not thinking about myself.”

Lukaku might have joined Chelsea in the summer instead of United when leaving Everton but has no regrets. “No. When I make a choice it’s with my head and my heart,” he said. “I made the right choice for me. As you can see, I’m in a good situation. I’m with a manager and players who push me every day. The challenge is there to win and it’s something that I wanted.

“I can still improve everything about my game. I’m 24 and I think I have a lot of years ahead of me before my prime so I’m never satisfied. I always want to improve and get better and it’s a nice challenge.”

He dismissed the criticism he has received for not scoring against a direct rival this term before Sunday’s goal. “That’s the situation around me – I just need to keep working hard,” said Lukaku. “I think I have got a nice record. I’ve scored a lot this season and I just want to keep going. I know that I can improve and I want to improve and really work hard. I want to win trophies. We are still in the fight in two competitions. It’s not going to be easy but it’s a nice challenge.”