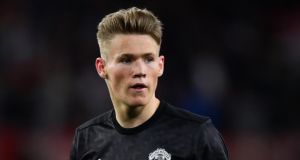 McTominay’s emergence as a bona-fide first-team player has caused some surprise at the club. The 21-year-old was viewed as a utility midfielder of promise whose abilities were hardly stellar. Yet Mourinho preferred McTominay to Paul Pogba recently, dropping the Frenchman for games against Huddersfield Town and Sevilla. And when Pogba was reinstated for Chelsea’s visit on Sunday McTominay’s place was not in doubt, with Ander Herrera’s injury opening up a place for the €99 million midfielder.

Those close to McTominay are not particularly surprised by a trajectory this season that has featured 15 appearances to follow two last year, his debut coming at Arsenal as an 84th-minute replacement on May 7th.

While United were knocked out in the quarter-finals, Scott was voted player of the tournament. That’s a real reason he was captain at school: kids just looked up to him

Mark Grayson was McTominay’s teacher and coach at St Wilfrid’s Church of England Primary School in Halton, a village near Lancaster where the player was born. “Scott was always a standout player,” says Grayson, who made McTominay captain of the team that claimed the Community Cup, an under-11 competition, in a Wembley final in 2008.

“He scored the winning goal. It was fantastic. We had the night before in the Ibis [hotel]. I don’t think the boys slept at all, as their bedrooms were facing Wembley, which was lit up.

“The changing rooms were absolutely enormous; these little lads were dwarfed by them. It ended 1-0 – the game got to all of the players – but Scott picked up the ball inside his own half, beat two players and scored in the corner.”

McTominay has been at United since his early school years; Grayson offers a story to illustrate that attitude is a key attribute in the player’s rise.

“When he was in my class in year five – 10 years old – his parents asked for two days’ leave of absence,” says Grayson. “He was representing United at an event in Spain where there were teams from Brazil, Italy, Spain and Germany. He took the Friday and the Monday, and when he came back to school went to his desk straight away.

“I said: ‘Whoa, Scott, tell us how it went.’ It was a small-sided tournament, but they had large crowds – a couple of thousand watching each game. United got knocked out in the quarter-final, but he scored a couple of goals. There was a round of applause for this and some well dones.

“Yet what happened next is the measure of the lad, as he’s unassuming; he just does the job. Because a little later in class he came to me and said, ‘Mr Grayson, my mum told me I had to tell you something else.’ And it was that, while United were knocked out in the quarter-finals, he was voted player of the tournament. That’s a real reason he was captain: kids just looked up to him.”

Dan Towers, who played in the Wembley final, remains a close friend. He, too, points to McTominay’s focus.

“He was always one of the smaller kids – now he’s a lot taller. He’s still got the good technical attributes and quick feet, but I’d probably say his attitude is mostly [behind his success]. He does a lot – for example, gym work that’s optional is just the norm for him, on his days off. We were in the gym on Tuesday night in Morecambe. He had three days off after the game. His mum and dad live in Lancaster, and he came for a bit of recovery.”

McTominay moved to Manchester in the second year of senior school, after being offered a scholarship by United. His parents, Frank and Julie, were concerned his height might hamper his prospects. At 18 he was 167cm, or 5ft 6in, although United remained calm. “They had done all the physiological tests,” says Grayson. “They said, ‘No, we expect him to grow well.’ And in the last 18 months he certainly has.”

McTominay is amazing – he is 21, and to play like that and control the game is impressive. He will be a big player for Manchester United

McTominay is 193cm, or 6ft 4in, now. Towers says, “Scott’s always been grateful for coaches – Paul McGuinness, Warren Joyce – who stood by him because they knew he had the technical ability to go on and make it. He also always mentions the United way too – Jesse Lingard, Marcus Rashford, you could go on and on. Seeing the players he played with when younger doing it pushed him.”

Nemanja Matic, his midfield partner against Chelsea, offers a glowing assessment. “He is amazing – he is 21, and to play like that and control the game is impressive. He will be a big player for Manchester United. When I joined I saw within a few days he would become a top player.”

Towers offers a further clue to the ultraprofessionalism that is now causing a tussle between Scotland and England for McTominay’s services. “He says he’ll assess who he’s going to be playing against so he’s not playing blindly. Like Hazard and Willian on the weekend. If you play blindly against those boys you can be made to look like an idiot at times. He does his research, works hard behind the scenes and is reaping the rewards of all the sacrifices he made.” – Guardian