Despite investing in academies, English clubs aren’t playing the kids

While clubs like Chelsea and Man City invest in their youth, they don’t actually use them 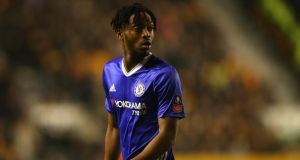 While the FAI tries to clamber back out of the hole it dug for itself with the decision to admit St Kevin’s Boys into the under-15 national league (other clubs refusing to play them is now a possibility), on the other side of the pond the architects of England’s youth development system are clearly hoping that the country’s run of success at recent underage tournaments is a sign that the vast investments being made are beginning to pay some dividends.

After the manner in which a few young players managed to establish themselves impressively in some of the stronger first teams last year and the various national teams’ tournament successes – two wins, a final and a semi-final at underage level in the last two months – the deals done so far this summer seem to suggest a more buoyant market within the Premier League for graduates of the top academies.

Although, as the spending sprees at Chelsea and Manchester City appear to confirm, there is some way to go before all of the very richest clubs start to hand opportunities to the players they develop themselves.

Inevitably, the wealth of the Premier League makes “ordering in” the easy option and not one English club featured in a list compiled by the Football Observatory of the leading 100 across 31 European leagues for the percentage of total game time given to players developed at that side’s young academy. The figure for the top side, FC Tatran of Slovakia, was a remarkable 75 per cent and many of the others leaders feature in “lesser” leagues, although Athletic Bilbao come in sixth and the likes of Barcelona and Bayern Munich both make the lower half.

When only the continent’s richest five leagues are considered, half of the top 10 clubs are Spanish, four French and one German. Arsenal are the only Premier League outfit to make the top 20.

In a separate Press Association survey of total minutes played in the Premier League last season by club academy graduates, whether at that club or any other, Manchester United come out on top with a total of 44,055, far ahead of Tottenham (19,995), City (16,226) and the rest.

For Chelsea the figures are 1.5 per cent and 13,445 respectively. The latter puts them just ahead of Ajax, then Feyenoord and Barcelona, but well behind the best English clubs despite having an academy that has been estimated to cost it more than €10 million per annum.

The situation, both at Chelsea’s academy in Cobham and more generally across the other 20 clubs, must remain a concern for England manager Gareth Southgate although the likes of Chelsea graduates Dominic Solanke, Nathan Ake and Nathaniel Chalobah moving on to other top flight clubs provides some suggestion of progress.

Selling those three to Liverpool, Bournemouth and Watford respectively, as well as Bertrand Traore to Lyon, has earned the club around €43 million, something that will more than sustain the economics of the academy. As well as that the fees, particularly Ake’s €23 million, point to serious intent on the part of the purchasers.

But at the club they leave behind there has also been the more traditional merry-go-round of players returning from loans then heading out again – many such Marco van Ginkel, Lucas Piazon, Kasey Palmer to name just three – with new contracts to console them. A handful of home grown players have also been given squad numbers and assurances that they more than just making up the necessary numbers and genuinely capable of competing for first team places.

The arrival of high priced recruits from abroad must make them wonder and when a striker like Michy Batshuayi – signed for £33 million last summer – barely seems to get much of a mention in assessments of Antonio Conte’s striking options, it must be difficult for younger players to keep the faith that there can be any future for them there.

Still, there is a sense that the likes of Palmer and Izzy Brown, who both played key roles in Huddersfield’s promotion; Ruben Loftus-Cheek, who has just gone to Crystal Palace for the coming season; and Lewis Baker, who stays at Stamford Bridge for now, are better equipped for life at the game’s top level than many of those who have passed the same way before. The system might finally be starting to work more effectively, even if producing a player of the quality actually required to become established at the level of City or Chelsea remains a particular challenge.

Having signed for Chelsea recently, Ethan Ampadu (the son of Irish under-21 international Kwame) was mocked on social media for signing for Chelsea and believing he’d ever play for the club. However, a player in his position surely has to believe himself that he can make it and those around him might finally be persuaded that the training he will get gives the best opportunity to have a good career at some Premier League club.

If there is any doubt about why so many of them stay as long as they do after it starts to become apparent that a breakthrough at Stamford Bridge is going to prove beyond them we can look to Michael Calvin’s book No Hunger In Paradise. In it he writes of how Chalobah, having turned out for Fulham in a game against the club aged 10 and done so well Chelsea made an approach at half-time about signing him, was rumoured to be on £36,000 a week as a teenage professional.

When the Siera Leone born player signed a five-year deal at the club, aged 18, he suggested he would like to spend the rest of his career there. Instead, he has moved to Watford on a similar five-year deal, although Chelsea – stung by previous miscalculations – have covered themselves with both buy back and sell on clauses.

Others are following suit, Calvin puts the collective investment in the English game’s Elite Player Performance Plan at around €460 million since 2012 with the same again due to be spent by 2020. A large chunk of the money spent so far has come from City who have invested vast sums in a bid to catch up and formed a strategic alliance with NAC Breda to rival Chelsea’s with Vitesse Arnhem while starting to stockpile young players in much the way Roman Abamovich’s club began to do more than a decade or so ago.

Inevitably, as clubs hoover up so many prospects from such ridiculously young ages, the majority will continue to fall by the wayside and, with the educational side of things in England still seeming to trail well behind the likes of Germany, much of what goes on can seem immoral. For those who make it to the end of the process, however, the odds might actually be shifting, at least a little.

Whether there really is a sustained improvement in the prospects of these young players will become clearer over a period of years. Even if the current crop are just exceptionally good, their progression stalls or ends up being nothing more than a statistical blip.

But one thing for sure is that there will never be a shortage of kids, and parents, willing to take their chances.