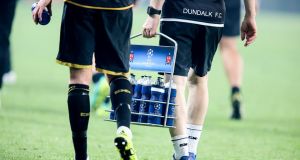 Irish teams have been improving in Europe, but can that continue? Photograph: Inpho

It is becoming a little brighter with the passage of time but the fat stat pack that the Airtricity League office in the FAI puts out around this time each year still makes for bleak reading.

Dundalk’s run last year, and the performances of a few other Irish clubs in recent seasons, have provided welcome evidence of the progress being made but the records provide a reminder of just how low a base we are coming from here.

Out in Tallaght there is framed collection of memorabilia from the games against Manchester United almost 60 years ago, which marked the league’s first venture into European competition. The Dublin club’s inexperience at that level and the quality of the opposition combined to ensure it was a baptism of fire with the first leg, at home, lost 6-0 on the way to an aggregate 2-9 defeat.

There were some close run things, most obviously the meeting between Dundalk and Celtic

It took a while before there were any signs of improvement. The following year Drumcondra drew Atletico Madrid and took an even bigger drubbing but it was they who finally secured the League of Ireland’s first victory in 1962 when they beat Odense in Dublin 4-1 and progressed 6-5 to the next round where Bayern Munich brought them firmly back to earth.

Like Drums, a couple of the foreign names that appear in the records are no longer quite so celebrated but a lot of still famous clubs feature through those early years.

There were some close run things, most obviously the meeting between Dundalk and Celtic when the Irish side came within a whisker of putting their celebrated opponents out of the European cup on away goals.

But for the most part Europe exposed how weak Irish clubs were compared to the continent’s better sides and though the there were a lot of factors at play, it is striking that a team like the Shamrock Rovers one of the mid eighties made no impact at all after beating Fram Reykjavik home and away in 1982; their reign at home coinciding almost perfectly with the league’s worst ever period in European club competition with just one of 60 games played by Irish sides won (by Bohemians) in the decade that followed.

Clearly, the turning point was the switch to summer football in 2003 although the dramatic expansion of the competitions and entry of so many more Eastern European sides had already changed the landscape.

The Inter-Toto provided early evidence of the improvement. Between 1995 and 2001, League of Ireland clubs won just one of 10 home legs played but in the seven seasons that followed they managed a 50 per cent success rate on home soil with a couple of draws ensuring that just five of 14 games played in Ireland were lost.

It is a very limited basis on which to gauge progress and results in more mainstream competitions remained decidedly mixed with some notable setbacks or in one or two instances, outright humiliations, but there was a sense at least that teams like Cork City, Bohemians and, most obviously, Shelbourne were prioritising the games and making some progress.

The money on offer even a decade or so ago was not quite what Dundalk made last year. Shelbourne stood to make at least €6 million in 2004 if they beat Deportivo La Coruna in the third qualifying round of the Champions League but that was for them actually making the group stages of the game’s top club competition.

Stephen Kenny’s side generated perhaps a fraction more in its poor cousin, the Europa League, last season and with the prize funds for both competitions about to be boosted again by new TV deals, but no noticeable improvement in the economics of the league here, the importance of these games is only going to increase.

In its recently launched strategic plan, the FAI listed a significant improvement in its collective club ranking as a priority but their league has a long way to go to make Uefa’s top 40 and they continue to be hindered by their winter season and, it seems, the enduring sense that Europe is something to be worked into a team’s preparations for the new league season.

Down south, the shift in emphasis was made entirely clear in the reactions of Cork City and Shamrock Rovers to beating opponents from Estonia and Iceland. The clubs they played may not be well known but the importance of the games, and the revenue they bring, is no longer a matter for the slightest debate.

The wins mean that the Irish clubs collectively creep up to 36th place (11 ahead of their Irish League counterparts) in Uefa’s latest provisional ranking list but now face far sterner tests. No Irish side has secured a win against opposition from the Czech Republic (ranked 12) while any teams Cyprus and Norway (25 and 28 respectively) should represent a significant step up from what teams here are accustomed to playing against.

Having finished a little adrift of the top three last season, Mlada Boleslav, one would hope, would be a little way behind their league’s best sides but all three are, in short, up against it and while Dundalk have shown what is possible there needs to be persistent progress before seedings start to be secured on a regular basis. Making life in the opening rounds just a little bit easier.

Eventually, though, it is going to come down to this: upsetting sides with bigger budgets and so, on paper, better teams. The last two weeks have made for a solid start but Rovers and Cork City will need, it seems safe to assume, to be a lot better in this round and Dundalk, even without a couple of last season’s stars, will have to be every bit as good as they were then.

At least the results required are considered plausible now. A couple of clubs have shown the way, but getting beyond that may take quite some time.