Declan Rice dismisses rumours of a move away from West Ham 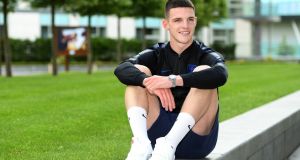 Declan Rice has dismissed rumours of a move away from West Ham this summer. Photograph: Ross Kinnaird/Getty

Declan Rice has dismissed rumours of a move away from West Ham as the midfielder prepares for the Nations League finals with England.

Rice has been linked with Manchester United since he broke into the first team last season. But the 20-year-old says he is content at West Ham, citing a special relationship with the fans.

“I know that there’s speculation but I signed a five-year contract with West Ham during the season,” Rice said. “So my focus is fully on playing for West Ham. I’ve got a great connection with the fans; the fans love me and I love them and that’s the way it is at the moment. I’m not thinking about anything else, for sure.”

Rice was one of the early arrivals at St George’s Park as England prepare for the chance to claim a first piece of silverware since Le Tournoi in 1997. With players from Chelsea, Liverpool and Spurs still performing club duties, the group remains below full strength. Only 17 of the 25 players are on-site. Rice, however, has been part of the camp for more than a week and on Tuesday took part in his first training match, playing Aidy Boothroyd’s under-21 side in a match the seniors won 5-0.

Next Thursday the action begins for real when England face the Netherlands in Guimarães. Rice says he can learn a lot from coming up against some of the Ajax tyros who excelled in the Champions League this season. In particular Frenkie de Jong, who is joining Barcelona this summer, is someone whose career Rice would like to emulate.

“Yes, definitely, I want that,” Rice said. “He’s a top player and I think you’ve seen that in the Champions League. When you start out in football you always want to play at the top. You want to play in the Champions League. If you were in football and you didn’t want to do that there would be no point playing. De Jong has got his move to Barcelona and it’s fully deserved. It would be great to come up against him in the Nations League.”

With a final against Portugal or Switzerland if England beat the Netherlands, the prospect of a trophy is real. But so is the possibility of disappointment for the second year in a row. Rice is adamant that winning the Nations League is vital if England want to continue their recent development.

‘I think it’s massive. It’s really important,” he said. “We’ve got ourselves into the semi-final. We’ve got a massive chance now to create history. With the squad Gareth has put together, with the players that we have, for sure we’ve got to be looking at the Nations League and winning it. It would stand us in good stead for the future and the Euros next year and the World Cup after that.” - Guardian