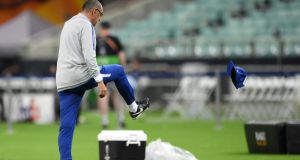 Chelsea manager Maurizio Sarri kicks his hat away in frustration during his side’s final training session ahead of the Europa League final against Arsenal in Baku. Photograph: Shaun Botterill/Getty Images

Manager Maurizio Sarri stormed away from Chelsea’s training session at the Olympic Stadium in Baku on the eve of the Europa League final against Arsenal within an hour of admitting for the first time he is considering his future.

Sarri twice flung his baseball cap to the ground in frustration, kicking it across the technical area, before departing down the tunnel while the session was still winding up. The tantrum occurred moments after Gonzalo Higuaín and David Luiz had been involved in an altercation during a practice match, though the club were quick to deny the incidents were connected.

Sarri is understood to have been unhappy that the team’s final training session was open to observers, as per Uefa’s stipulation. There was presumably exasperation, too, that N’Golo Kanté had been limited to around half an hour of gentle running with a physio. The knee injury picked up at Cobham on Saturday is likely to see him start the final on the bench at best. The midfielder spoke at length with the medical director, Paco Biosca, on the pitch before going inside for further treatment. Sarri had earlier rated his involvement as “50-50”.

The fraught nature of the session rather clouded the manager’s preparations as he seeks to secure the first silverware of his career in Baku in a game Chelsea’s opponents must win to secure Champions League football.

Yet, despite a third-place finish in his first campaign in charge, Sarri’s future at Stamford Bridge remains very much in doubt. Juventus have been credited with an interest in luring him to Turin as a replacement for Massimiliano Allegri, and, given the fractured nature of his relationship with a section of the club’s support, Chelsea are unlikely to stand in his way if his contract is bought out.

Sarri has suggested he will hold talks with the director, Marina Granovskaia, in London in the aftermath of the Europa League final, but admitted there are questions to be answered over his future.

César Azpilicueta suggested the priority will be to “ruin” the victory parade already planned by Arsenal – such events have to be cleared in advance – for Thursday in Islington should they prevail in Azerbaijan.

Petr Cech is set to feature against his former club in what will be his final game as a player, with the Arsenal goalkeeper expected then to rejoin Chelsea in an administrative capacity.

That had prompted concern in some quarters over a possible conflict of interest. “How can we not believe in him?” asked Unai Emery of the 37-year-old. “I respect him a lot. His career has been amazing, first as a person, second as a professional goalkeeper. He deserves trust in him. He is a great man and a professional.” – Guardian

1 Owen Doyle: Creeping professionalism of schools rugby a threat to the game
2 Champions Cup: Leinster will meet Saracens on Saturday evening
3 Ole Gunnar Solskjær insists he is up to the challenge at United
4 Coco Gauff pulls off biggest shock yet by beating Naomi Osaka
5 Matt Williams: Expect the unexpected in rugby’s greatest tournament
Real news has value SUBSCRIBE
Crossword Get access to over 6,000 interactive crosswords