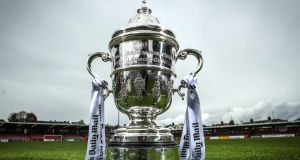 The draw for the quarter-finals of the FAI Cup was condicted on Monday morning. Photograph: James Crombie/Inpho

Galway United’s reward for beating Cork City in the FAI Cup on Friday night is a home tie against Shamrock Rovers at the quarter-final stage. The Dubliners will start as favourites but the game is a repeat of the 1991 final in which United sprung a surprise to beat them 1-0.

The only non-league side left in the competition, Crumlin United, will take on Bohemians. Holders Dundalk are set to travel to Waterford although that game is one that could be postponed due to the involvement of players in Stephen Kenny’s Under-21 side which is due to be named on Wednesday.

The team has European Championship qualifying games against Armenia and Sweden on the 6th and 10th respectively, and the involvement of home based players may yet cause significant disruption as the Toulon tournament did back in June. UCD, who head to Sligo, were particularly affected then and their game at the Showgrounds may well have to be rescheduled over the coming days.

The quarter-final draw was conducted on Morning Ireland and had been intended to involve FAI President Donal Conway but RTÉ said that they had been informed last night that he would not be available, presumably because he was likely to have been asked about the latest round of revelations about governance issues at the association during his time on the board.

Ties will take over the weekend of September 6th to 9th.