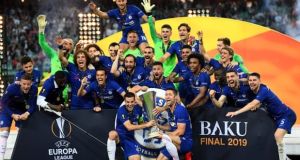 Chelsea won the Europa League in Baku but the city’s remoteness kept many fans away, while Arsenal’s Henrikh Mkhitaryan did not travel owing to safety concerns. Photograph: Michael Regan/Getty Images

A coalition of Arsenal, Chelsea, Liverpool and Tottenham supporter groups has called on Uefa to improve the experience of fans at European finals and to avoid awarding showpiece occasions to countries with questionable human-rights records.

Liverpool and Tottenham fans were awarded only 33,286 of the 68,000 tickets for last season’s Champions League final in Madrid and complications were caused by the Europa League final between Arsenal and Chelsea being held in Baku, with many supporters staying away because of the cost and inconvenience of the 2,500-mile journey to Azerbaijan.

There was further outrage when Arsenal’s Henrikh Mkhitaryan did not travel to Baku because of fears over his safety. The Armenia midfielder pulled out after deciding it was too risky to travel to Azerbaijan amid the conflict between the countries over the disputed Nagorno-Karabakh region.

With the draw for the Champions League group stage to take place in Monaco on Thursday and the one for the Europa League on Friday, the Arsenal, Chelsea and Tottenham supporters’ trusts and the Liverpool fan group Spirit of Shankly have urged Uefa to place the needs of supporters over sponsors.

They have come up with a six-point plan including calls for European football’s governing body to allocate 80 per cent of tickets for finals to supporters, to sell tickets at affordable prices and to choose a host city “that ensures no discrimination or denial of right of entry is applied to any player or supporter travelling to the final”.

The groups said football would be nothing without fans and demanded Uefa stage finals in cities with good transport links and stadiums with large capacities, plus suitable accessibility for supporters with disabilities. Large numbers of disabled supporters of Arsenal and Chelsea chose not to travel to Baku.

The groups said in a statement: “Reaching a Champions League or Europa League final should be a wonderful experience for a club’s supporters. Instead, they can face a struggle just to attend the match. Problems range from inadequate numbers of tickets being awarded to the finalists through to all-but-impossible travel arrangements. Too often fans who had supported their clubs in every round up to the final were left out of pocket or not able to attend the final at all.

“Tomorrow’s much hyped draw will involve everybody from the football family except the very people without whom there would be no European football – its supporters. We call on Uefa to strengthen its dialogue with fans and request they start by engaging with groups like ourselves to discuss the proposals we have put forward.” – Guardian

1 ‘Manchester United are lucky to have you’: Klopp responds to Donegal schoolboy’s letter
2 Six Nations: Ireland v England all you need to know guide
3 Iain Henderson ruled out of Ireland’s Twickenham visit
4 Eddie Jones: back three will deal with Irish aerial threat
5 United greats in attendance as club hero Gregg laid to rest
Real news has value SUBSCRIBE
Crossword Get access to over 6,000 interactive crosswords